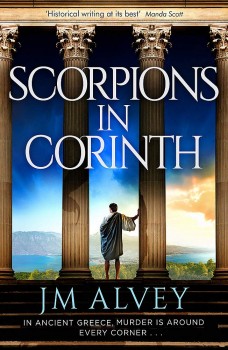 Athenian playwright Philocles and his actors have been hired to take one of his popular plays to Corinth. Critics he can take, but poisoning is a bit extreme.

Athenian playwright Philocles and his actors have been hired by one of the richest men in Corinth to take their successful play, The Builders, to a new audience. Oligarch Perantas Bacchiad hopes to use the play to convince his fellow Corinthians to back the idea of a new colony in Sicily. It’ll mean tailoring a lot of the jokes to different tastes and a different political background, but that’s a challenge Philocles is happy to take on, with some help from one of his actors, a Corinthian.

What he hadn’t bargained for was the death by poisoning of Eumelos, the local ‘fixer’, assigned to them by Perantas. Philocles is certain the man’s death is part of a plot to sabotage the success of his play and he’s determined to uncover the murderer, but in a strange and possibly hostile city, that’s going to prove difficult.

Philocles is a strong main character and I very much enjoyed his first appearance in Shadows of Athens so I was very happy to be taken back in time to be a bystander to the events playing out in the taverns, temples and amphitheatres of a city ruled by the super-rich and riven by competing hero cults that seem like an ancient version of the sort of unruly clashes seen between rival football supporters.

Alvey is clearly mindful of the problems of credibility that often dog the amateur sleuth both ancient and modern, and succeeds in making Philocles’ investigations wholly organic, growing out of his need to protect his own livelihood. Alvey brings Corinth vividly to life, with all its sights and smells. She knows her history, but the book wears that mantle lightly and there are no clumsy info dumps. The language feels contemporary but is never jarring, and speaking personally, I have no problem with a mix of ancient and modern cursing and epithets.

The rehearsals and the performance elements of the story stand up very well to scrutiny. I felt like I had a prime seat in the amphitheatre, and it was easy to imagine the stately chorus with their impressive masks and to understand the pull that these performances exercised over their audiences. I was catapulted straight back to my college days studying Aristophanes and enjoying the sharp political asides and ribald piss-taking that appealed to me as much then as it does now. I’d happily take my place in the audience for a performance of The Builders but I might get someone to check my wine before I drank it…