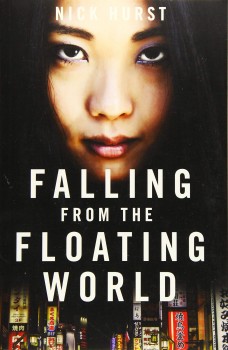 Falling From the Floating World

Ray Clemence is an Englishman in Japan. When his girlfriend Tomoe disappears, he suspects the yakusa is involved. His attempts to find out more brings him into their clutches and there appears to be no escape.

When Ray Clemence is sacked from his London job he tries for a fresh start in Tokyo, using his university Japanese. Things initially go well: he finds a good job teaching English and acquires a beautiful girlfriend, Tomoe. But Tomoe suddenly seems distracted and confesses that she is upset about the sudden death of her father.

Tomoe is reluctant to give complete details, but relates that her father was killed and that the killing is somehow connected with yakusa, organised criminals. She asks Ray to visit a specific massage parlour, to partake of the services offered and to make enquiries about recent visits by the head of the Takata-gumi, Tokyo’s largest gang.

Ray does as she asks but acquires little information. He hears enough, however, to challenge Tomoe about her work, and the connections she has with the Floating World, where various forms of artistic expression and prostitution come together. They argue, and Tomoe thereafter disappears.

Ray soon realises that he misses Tomoe dreadfully, but his attempts to find out what has happened to her are blocked. In desperation he throws himself on the mercy of Takata Eiji, the gang leader, and finds himself recruited into the gang to do their bidding, being promised knowledge of Tomoe but certainly a painful death if he refuses to cooperate.

Unlikely as it may strike the reader that the yakusa would have interest in recruiting a gaijin, a foreigner, Ray’s arrival coincides with a time of conflict between the Takata-gumi and a rival gang, and Ray can be used as a means to engineer circumstances without provoking open warfare. A feature of the yakusa is the absolute loyalty to the organisation and to the boss, so it is natural they would seek to bind him with many of the notorious aspects of the culture: induction ceremonies, tattooing and severing of fingers to express apology for any failure.

Despite being initially convinced of his own cowardice and inadequacy, Ray finds himself able to perform the irritant role for which he was recruited. Part of this calls for some research into the Japanese nuclear industry, revealing both real and fictional cases of inadequate planning and negligence in operation leading to incidents, followed by cover-ups and lies.

There is enough of interest in all this which, combined with Ray’s bruising adventures told in the first person, keeps the pot boiling and by the end it is easy to forget that Ray is working with a mafia-type organisation which preys upon law-abiding citizens. The author certainly displays his affection for Japan and includes a note on Japanese words and pronunciation as well as a cast list for those in need of help.