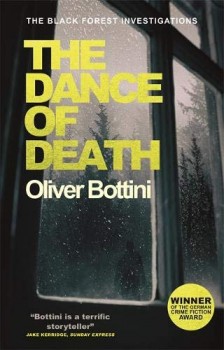 The Dance of Death

Freiburg detective Louise Boni tries to protect a family under threat from a man who appears outside their house, holding a gun.

The third Black Forest Investigation sees the reappearance of detective Louise Boni, a recovering alcoholic. The investigations detailed in Zen and the Art of Murder and A Summer of Murder ended in deaths or damage to innocents or to colleagues which remain close to the surface of her mind, a raw sensitivity which gives a heightened intuitive sense while at the same time threatening her mental balance.

Her latest case begins when Paul Neimann and his son Philip, relaxing at home, are startled when a man in his 60s emerges from the fog outside their living room window, pointing a gun. The man runs off, but later returns. In the dead of night he gains access to the house, and wakes Neimann, telling him that the house in now his and that Neimann has seven days to vacate it.

The foreign accent of the visitor seems to be the only clue as to why Neimann has been selected for the visit. Neimann is curiously feeble in response to police questioning but Boni becomes persuaded that the link may be related to a period he spent in Munich assessing claims for refugee status for those displaced by the Balkan conflict in the early 1990s.

Despite significant deployment of police resources, including those of Boni’s Serious Crimes Section, the intruder proves to have planned carefully and is able to push forward with his hostile intent against Neimann, his wife and two children. Boni quickly forms a close relationship with the wife, Henriette, and the daughter Carola, while being well aware that this exposes her to anguish if she is unable to ensure their safety.

Investigations do eventually establish a link to the war in the Balkans, and Boni makes a visit to particular sites where terrible events took place. She finds details of families of German descent encouraged to resettle by Austro-Hungarian authorities in the 19th century, subject to repeated dislocations in the 20th and ending with flight to their ancestral homeland, only to be refused safety in their country of origin.

Personal tragedies emerging from this conflict have been adapted for crime fiction and certainly one can see how motives of revenge might arise. The enmity of the various warring parties is so intense, however, that I found it difficult to believe that a minor functionary in another country would be high up on anyone’s priority list.

Boni is as always the central focus in this trilogy and the author conveys her intensity of feeling so well. The translation by Jamie Bulloch is excellent and the character is mesmerising. Whether any police organisation would be willing to tolerate her odd behaviour for the excellence of her hunches is something the reader will have to judge.