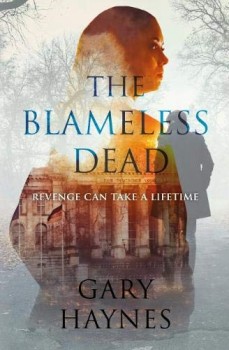 FBI Special Agent Carla Romero and lawyer Gabriel Hall are thrown together as they investigate a series of gruesome crimes that have their roots 70 years in the past.

Although it contains a number of incredibly beautiful descriptive passages, Gary Haynes’ story of war, revenge and retribution could hardly be called a pretty book. Some of his portrayals of man’s inhumanity to man, including wartime and more recent atrocities, torture and abuse involving women and children are so horrifically realistic, many readers may find it more than their stomachs can stand.

Most of his characters are, in their own way, victims, deeply affected by experiences that have damaged their souls beyond repair. Switching between Berlin in 1945 and New York in 2015, Haynes has melded a tale of wartime atrocities with a contemporary crime mystery to create an action-packed thriller which takes his readers into dark places and confronts them with some seriously depraved characters.

It opens in April 1945, the dying days of Hitler’s Berlin as the Red Army smashes its way into the German capital, subduing it street by street, raping and killing indiscriminately, encouraged by a regime that fosters a cult of revenge for the brutality of the Nazi invasion of Russia.

Pavel Romasko is trying to get his squad through what he knows must be the last days of the war. Outnumbered by an approaching patrol of fanatical Waffen-SS defenders and pinned down by a sniper, he leads his men into the remains of a bunker. What they find inside sickens even Romasko’s battle-hardened veterans and lays the ground for everything that follows.

Seventy years later in New York, FBI Special Agent Carla Romero and freelance lawyer Gabriel Hall are thrown together by the killing of a power couple and what appears to be a particularly nasty snuff DVD found in the possession of the neo-Nazi main suspect for the murders.

Hall has his own reasons for volunteering to assist the man’s defence, driven by his obsession to discover what has happened to his partly disabled adopted niece, who disappeared while in his care. He has reason to believe that her birthplace may have had a role to play. The turbulent history of her homeland of Kalmykia in southern Russia and its distinctive culture is pivotal to events throughout the story.

Part crime mystery, part historical shocker, Haynes’ story is a skilfully constructed thriller which delves into some deeply disturbing subject matter. He is meticulous in his research with detailed descriptions of weaponry, uniforms and military units and universal in his condemnation of the totalitarian regimes of both Germany and Stalin’s Russia which sparked a war marked by a series of horrors and, despite the ending of hostilities, left a lasting legacy on many of those involved.

He never minces his words, and the historical accuracy and blunt, cold and brutal descriptions will leave the reader almost smelling the scent of death. It is not for the squeamish or those who do not like to face the harsh realities of war and the madness and atrocities it spawns.

There are so many layers to his story as it moves back and forth through time, building slowly to an explosive, emotional conclusion. Possibly the most balanced thing a reviewer can say about it is that it is an exploration of the effects of extreme trauma on the human psyche and a telling reminder that violence can only breed more violence.