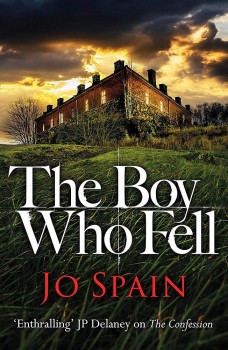 The Boy Who Fell

The body of a teenage boy is found outside a deserted house where he had been partying with friends. Examination suggests he was raped before being pushed through a window to his death. His alleged attacker is in custody, but DCI Tom Reynolds has doubts.

As much a whydunit as whodunit, this fifth story in Jo Spain’ s clever, compulsive and occasionally blackly comic DCI Tom Reynolds series is definitely crime fiction for grown-ups. After a prologue that is probably the most mind-focussing introduction you will read this year she takes her time to explore the ins and outs of human psychology.

The book is set in the aftermath of the collapse of Ireland’s ‘Celtic Tiger’ economy and the run-up to its historic referendum to legalise same-sex marriage. Spain explores the gap between the country’s privileged few and the rest of society, their attitude that their position should offer them protection and their willingness to cover up for each other – even when it comes to murder.

The story centres on the death of 17-year-old golden boy Luke Connelly, son of a wealthy family, who fell to his death from a window of the deserted house where he and his friends were partying with drink and drugs. His group of friends are a privileged, entitled bunch – apart from club DJ Daniel – who is black and gay, something of an anomaly in a privileged and entitled group in a conservative and predominantly white part of Dublin.

Daniel, left alone in the house with Luke when the others left, is now in custody. The case against him is strengthened when a post-mortem examination shows signs the dead boy may have been raped. With Daniel refusing to say anything at all to clear himself, the case looks open and shut. Luke’s parents, already facing the loss of his twin brother to a rare form of cancer, and those of the other youngsters present that evening have used their position to keep the story from the press and want the trial to be disposed of as quickly as possible to avoid further embarrassment.

Reynolds, on the verge of his biggest promotion to take charge of the National Bureau of Criminal Investigation, is approached by a colleague, a  relative of Daniel’s, asking him to look at the case, believing it’s not so cut and dried as the original investigators have made out. From his only worries being the pile of paperwork which awaits him in his new management role; deciding which of a pair of detectives – about to wed – will succeed him; and how he will plan the groom’s stag night, he finds himself facing a possible murder investigation in a world of privilege and protection.

As he begins to explore the world of Connolly and his upper-class friends, he begins to realise the lengths those living in this cosseted environment will go to to cover up for each other – even when a possible murder is involved.
Spain’s brilliantly crafted story, with every piece of the puzzle gradually slotting into place will keep the reader gripped until the end. Reynolds is hardly a typical literary detective – he’s no troubled misanthropic loner with drink or drugs problems. In fact, despite being a fine, patient and frequently sympathetic investigator, he could be described as rather normal and dull. His character allows this intelligent thriller, refreshingly free of gore and sensationalism and which follows a single timeline, to dominate centre stage and develop at its own pace.

For action junkies, this may be a bit slow and if I was forced to criticise, Spain’s presentation of Connolly’s so-called friends is a little one-dimensional. They are ‘normal’ wealthy upper-class kids, self-centred, swaggering, shallow liars, leading privileged lives, where mummy and daddy pay to get the results they want. This stereotyping, however, detracts little from an easy to read and engaging story, despite its reasonably complex plot. The concentration is firmly on Reynolds, a normal, rather nice man, good at his job and devoted to the pursuit of justice.

Should he return, it will be interesting to see how he copes with the endless paperwork, management meetings, financial constraints and political correctness his new post has sentenced him to!