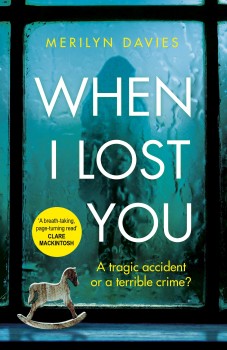 When I Lost You

Crime analyst Carla Brown must help the police team find out if the baby’s murderer is her mother, or if an even more sinister crime has taken place.

DS Nell Jackson and DC Paul Hare attend the scene of what looks to be a sudden infant death of a young baby on an estate in Oxford. But forensic pathologist Eve Graham calls murder and points the finger at the young mother. New boss, ex-Met DCI Bremer, assigns Nell and Paul to investigate the case, but he has a broader interpretation of crime analyst Carla Brown’s role, taking her with him to interviews. This is a slight in Nell’s opinion, and tension thickens the atmosphere.
Eve receives a malicious letter implying she is falsifying evidence. With a recent overturned verdict against another mother in a case that Eve testified on, her supposedly impartial judgement comes into question. The team now has not only a child’s death to investigate but they also must find out whether there is any truth in the accusation.
And then there’s a Portsmouth care home 35 years ago. A predator targets two vulnerable 15-year-old girls, grooming them, abusing them and destroying their lives.
This complex book has its feet in two genres – crime procedural and psychological thriller. Initially, I couldn’t decide if analyst Carla or DS Nell Jackson was the primary protagonist. I rooted more for the former, but eventually I stopped wanting to slap Nell for her negative attitude and found a connection with her.
The police team are all realistically flawed characters, alive with weaknesses, strengths and doubts, which gives weight to their behaviour and responses under pressure. The main characters are well crafted and engaging. Although they bitch and snipe, the investigators and Carla feel like a cohesive unit.
Carla’s behaviour, introspections and her tenacity make her a likeable character. Her job allows us to see some behind-the-scenes work and thought processes. But more than just being good at her job, Carla cares, and is a perceptive colleague. She won’t hesitate to go the extra mile, but she is not arrogant or pushy. When the new boss asks her to tag along and interview people, making her leave her office and be more actively a member of the team, she follows with misgivings.
The ‘today’ narrative alternates between Nell’s point of view and Carla’s, each with their own feelings about the case and daunting pathologist Eve. Eve is obstructive, loathe to answer questions and has prickly, cold manner and a festering attitude.

Although I enjoyed the investigation, the earlier storyline proved far more compelling. The darkness surrounding the two girls and their vulnerable hopelessness twanged at my heart strings. However, plausibility aspects and some hugely unlikely events that I cannot believe would have remained un-investigated or unchallenged occasionally tested my suspension of disbelief.
When I Lost You covers a range of delicate topics, including child loss, domestic abuse, child abuse and grooming but Merilyn Davies handles them sensitively. That the author is a former crime analyst gives the story an authentic, experienced and intelligent feel. Yet pleasingly there is not too much police jargon. There is a good sense of atmosphere along with time and place in both timelines. And the pacing is reasonable.
Concentration is essential for this book because of the number of characters and, at times, confusingly complex plot. I did find myself muddled at one point reading the present-day police investigation. Some readers will find it hard to find satisfaction in the denouement. But overall, this is an excellent debut novel.