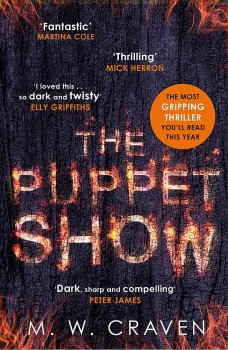 A serial killer is torturing men and then burning them alive, leaving their bodies in stone circles in and around the Lake District. Disgraced copper Washington Poe teams up with the brilliant but socially inept civilian analyst Tilly Bradshaw in the hunt for the killer.

A series of gruesome murders in the Lake District have the local police stumped. The victims were mutilated then burnt alive, their bodies left in prehistoric stone circles. The fact that a serial killer appears to be at work has flagged the investigation up to the Serious Crime Analysis Section, a division of the National Crime Agency.

Civilian analyst, the brilliant but socially utterly inept Tilly Bradshaw, has been examining the post-mortem photographs and has noticed something that had been missed by everyone else. One of murdered men had an apparently random series of slashed on his chest but, when fully analysed, these turn out to be a name. The name of a police officer currently on suspension: Washington Poe. With the press all over the case of the Immolation Man, as the killer has been dubbed, like a particularly nasty rash, the SCAS director decides to lift Poe’s suspension and involve him in the case.

I must admit that I almost gave up very early on this book. If there are three things I dislike in crime fiction, they could be summarised as a) serial killers b) serial killers given nicknames and c) coppers with quirky names. It took me years to get around to reading JK Rowling/Robert Galbraith’s Cormoran Strike series simply because of his name. The alphabet soup of acronyms that litter the pages of The Puppet Show didn’t help, either. Yes, they’re all explained but only once. After that, you’ve got to rely on your memory, and with new acronyms constantly being introduced, that’s not an easy task.

I persevered, even if at first I wasn’t entirely sure why, and I’m glad I did. Despite his name, Washington Poe quickly grew on me, as did Tilly Bradshaw. Poe is blunt, no nonsense and quite happy to sail very close to the wind in his investigation methods. Tilly is utterly literal-minded, and clearly capable of driving her bosses to distraction. There’s also the long-suffering DI Stephanie Flynn, previously Poe’s sergeant when he was a DI.

Throw the three together and stir well and an excellent, entertaining character dynamic emerges. Bradshaw has the potential to be annoying, but she’s handled deftly and as a result, comes over as engaging rather than irritating, and her razor-sharp mind is able to cut through a mass of seemingly unconnected data points, spotting patterns that have eluded everyone else.

I enjoyed the unlikely friendship that grows up between the often dour Poe and the irrepressibly bright Bradshaw. His refusal to put up with bullying in any form drew me to him, and then the undercurrent of humour in his interaction with others started to show through. Bradshaw is, quite simply, a delight. Flynn stands out as a decent woman and a good detective. Together, the three start to join the dots in an investigation that at first seems to be going nowhere.

MW Craven perfectly captures the flavour of the Lake District as an area, and reminded me strongly of the way the Peak District has become a character in its own right in fellow crime writer Stephen Booth’s hands. Poe lives several miles off the beaten track on the bleak Shap Fell, familiar to travellers on the northern section of the M6 as the highest section of motorway in the country. When I lived in Preston, if you had to travel north in winter, you were always pleased to get over Shap without encountering snow, and there were times in summer that it didn’t seem much more hospitable. The stone circles such as the starkly impressive Castlerigg provide an atmospheric backdrop to a fascinating investigation that has to dig deep into the past to shed light on what’s happening now.

Craven manages to lift the book head and shoulders above the run-of-the-mill serial killer fare where writers seem to try to out-do each other in nastiness and gore. There’s plenty of nastiness here, but it’s not the defining part of the story. The Puppet Master is a clever, character-driven story that caught my imagination and kept me guessing as I followed Poe, Bradshaw and Flynn around the familiar landscape of the Lake District in the quest to uncover the identity of the killer.

The reveal came out of left field for me, but the clues were all there, I just hadn’t picked up on them. If serial killers are your bag, you’ll love it. If, like me, you normally run a mile from them, take a chance. I don’t think you’ll be disappointed.