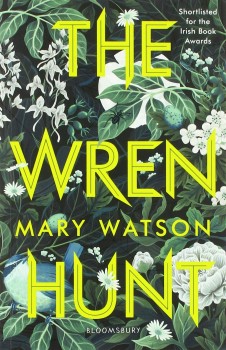 Wren Silke is sent undercover to the sinister Harness Foundation in an attempt to uncover its dangerous secrets.

Wren Silke doesn’t enjoy the annual wren hunt. She’s the hunted, and a group of bully boys from the village are the hunters, led by the obnoxious David, who’s determined to catch her. The sick ‘game’ has gone way beyond a childhood joke, and even then, it was a bad joke. Wren’s fear is palpable as she’s pursued through a dark forest, doing her best to get away, as branches whip her face and the dark trees close in around her. The hunt ends as it usually does, and David claims his prize, a fistful of Wren’s hair.

Wren’s afraid that will give him power over her, and in the village of Kilshamble, that might well be true. Magic weaves in and out the story, turning the everyday extraordinary as it becomes clear that there’s more than just a warped childhood game being played. There are deep divides in the village and the surrounding area. Wren and her family are augurs, an ancient Druidic faction opposed to the judges, locked in an ancient enmity. The sacred places of the augurs are rooted in the landscape, but these are now under attack and their power is waning.

In an attempt to fight back, Wren is sent undercover to the mysterious Harkness Foundation, deep in judge territory where her task is to get close to the founder, Cassa Harkness, and uncover her plans to complete an ancient and dangerous ritual. Getting close to Cassa involves having to see David, her tormentor, as he’s one of the cadre of boys who are there to protect Cassa. She also encounters Tarc – short for Tarquin – the chief of Cassa’s protectors. Tarc is protective of Wren, and despite the heritage divide between the two, Wren starts to like him, and that liking will prove dangerous.

The Wren Hunt is set in modern-day Ireland, where life in some villages can seem as if it’s taking place 100 years ago. The book is suffused with magic that’s deep rooted in the landscape. It was easy to lose myself in the story, accepting the magical realism, even though I found the references to augurs and judges confusing at first – simply words, rather than the more fleshed out world building I was groping for. At times I felt almost as lost as Wren in the woods surrounding Kilshamble.

The differences between the two factions did come clear as the book progressed, but it was something of a slow burn for me. The Wren Hunt does repay the effort, though, and I was caught up in Wren’s quest, unsure who could be trusted, as even her own family seem to be keeping secrets from her. There’s a Capulet and Montague vibe to Wren’s relationship with Tarc, with the strong feeling that nothing good is going to come of attempting to bridge centuries-old traditions, despite the hope that things will work out for them.

The Wren Hunt is a darkly modern take on an age-old story, blending reality and fantasy into a seamless whole rooted deep in the Irish landscape and redolent with its traditions. Mary Watson’s writing is fluid and lyrical, bringing this teen/YA story of bitter ancient divides vividly to life on the page.