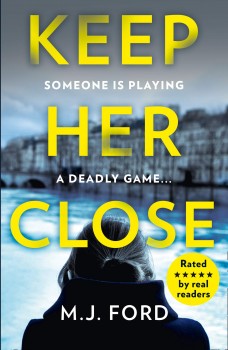 DS Josie Masters is on her way to see her mother in an Oxford care home when her phone rings and she is told to go immediately to Oriel College where a girl student appears to have gone missing. It soon becomes clear that she is not the only one.

This is the second book featuring DS Josie Masters and as it opens, we find her undergoing a counselling session. During its course reference is made to an event in her past. We learn that her colleague and lover, Ben, had been murdered and that she herself had killed a man who had attacked her. She seems rather impatient with her counsellor who she believes is bringing up events that occurred some time ago and have no relevance to the way she now feels.

Immediately following the counselling, she receives a call from her Inspector, Andy Carrick, telling her to go urgently to Oriel College, where a student named Malin Sigurdsson has apparently gone missing. Josie is involved in the investigation when the body of another young woman – this time a servant at Jesus College – is discovered in the river. There appears to be nothing to link these two girls – a supposition that has to be revised when a third girl is reported missing, this time from Somerville College.

Suddenly the city is in a panic, particularly when the press makes the fate of the girls its main headline. Something rather like panic begins to affect Detective Chief Inspector Stratton too. The Standards Committee has already criticised him for mistakes made in a previous investigation, mistakes for which Josie is convinced he blamed her. She is convinced that he is looking for an opportunity to remove her from the investigation into the missing girls, but she manages to remain involved in it, even if only informally.

The description of the ongoing investigation is a very convincing representation of actual police methods and the reader's interest is sustained throughout. The only criticism of the plot is that it appears to have two endings. The first is entirely plausible but suddenly, in the space of a few pages, we are presented with a second, this time one that is less convincing and which appears to have been introduced purely for the sake of surprise. This is a pity because not only does it make the plot over-complicated, it also tends to make us forget just how intriguing it had been up to that point.

Also impressive is the way in which the author can build his characters. Using quite broad brushstrokes, he is able to give us the essence of the person being described. There is, for example, Miss – she can only be a miss – Belinda Frampton-Keys, the vice-provost at Oriel. She seems to have little interest in the missing girl and is concerned only to avoid anything that might sully the reputation of the college. DCI Stratton appears to be less concerned with doing his job and more with the adverse effect on him politically if the case is not quickly solved. It is not at all surprising that he should wish at all costs to impress the local MP who has a personal involvement in the case.

The other character who is very well drawn and with whom the reader can quickly sympthise is Josie herself. She is efficient, persistent and not easily persuaded that she is wrong. In fact, there is a temptation, having finished this novel, to go back to the previous one in which she featured to find out more about her. The author himself seems aware of her attraction and even goes so far as to add – quite unnecessarily – an epilogue, when the story was clearly complete. What his reasons are for including this are by no means clear.