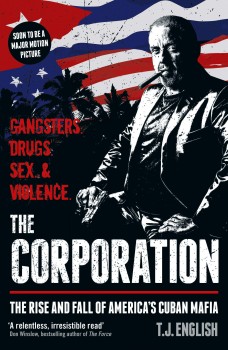 The non-fiction story of exiled Cubans who contested Castro’s leadership from the USA, and of one who built a lottery-based organisation which moved into money-laundering, drug trafficking and murder.

There were plenty of Cubans who found Fidel Castro uncongenial, especially policemen and criminals who had made a good living under Batista. The USA was more than happy to use those fleeing the new regime to destabilise Castro and recruited many into an armed force specifically trained for the invasion launched at the Bay of Pigs.

Word of that operation had reached Castro, who was well prepared. The attempt quickly turned into a fiasco despite heroic efforts by some of those involved before the inevitable capture and during imprisonment afterwards pending eventual release through negotiations with the US Government. The shared suffering of the period created strong bonds between the men involved.

One of these counter-revolutionaries was Jose Miguel Battle. When it became clear that the US had no appetite for further armed challenge in Cuba, Battle moved to Union City, New Jersey, which had attracted a number of his compatriots. There he set up a bolita operation, a lottery, which operated much the same way as it had in Cuba.

Battle had a sit-down with the mafia operating locally, who were agreeable to this particularly Cuban form of betting providing they received a slice of the profits. Before long Battle’s ‘Corporation’ was generating huge profits, which attracted competitors and eventually to shootings and murders to maintain supremacy.

Battle and his key personnel relocated to Miami, where the climate was more familiar and where the inflow of cocaine offered additional opportunities. By the 1990s US federal agencies had become aware of the scale of the enterprise and were actively building a case against dozens of participants; Battle and his generation were destined to spend their last few years in jail.

The book links a number of crucial areas of recent US history which cannot help but be of interest. It gives details about US attempts to undermine Castro pre and post the Bay of Pigs episode, the links between the mafia, Cuban émigrés and the Kennedy assassination, and the way those of Cuban extraction came to be active in operations to destabilise left-wing governments in Central and South America.

The Corporation, once established, looked very like the mafia in operation, with due allowance for the national characteristics of those in charge. Rivalry with a competitor led to a spate of fire-bombings in the 1980s, including 60 fires in less than two years in which eight people were burned to death. Battle modelled himself on Coppola’s Godfather.

The basis of the Corporation’s profits, bolito, is in effect a numbers racket but very popular with Cubans. The traditional belief is that items in the real world can be represented by numbers, and a knowledgeable person can translate features of dreams into numbers which may bring you a fortune. Whether your chances of winning are better on the National Lottery I wouldn’t like to say.