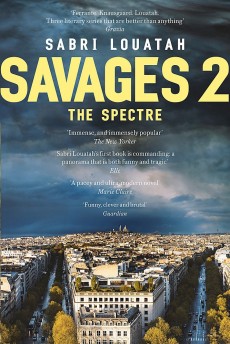 France’s first Arab president is shot on election night. As he lies between life and death, riots explode, terrorist attack threatens and political factions battle for power. Caught in the middle is a third-generation French family whose roots are in the Kabyle region of Algeria.

After almost 15 years living in France, I can only say that Sabri Louatah’s four-volume clever, brutal and even at times funny, Saint-Étienne quartet is a stunningly true reflection of a country ill at ease with itself and lacking balance or direction.

This epic centres on a working-class family of Algerian descent in Saint-Étienne, capital of the Loire department in the Massif Central of eastern France. Louatah, whose own third generation immigrant family is from the Kabyle region of Algeria, grew up in social housing in this former arms manufacturing and coal-mining city.

Saint-Étienne, fading for years, is often quoted as a symbol of de-industrialised urban decline. Around a fifth of its population, who moved into social housing estates designed to regenerate the area, are immigrants, mainly from North Africa.

When riots tore through the banlieues of major French cities in 2005, Louatah was reading Dostoevsky’s Demons, with its focus on rage and nihilism. This part family saga, part political thriller explores the unresolved anger of those riots, which he calls ‘year zero of contemporary France’.

The action in Savages 2: The Spectre, set seven years later, and published in France in 2011, is astonishingly prescient. The first volume was written well before the Islamist terrorist attacks in 2012 and 2015. Over a period of 24 hours as the nation prepares to vote in the presidential election run-off, two families of Algerian heritage gather for a wedding party.

The ‘election of the century’ is between the right-wing incumbent and the left’s charismatic ‘French Obama’, fictional politician Idder Chaouch, the popular, witty, secular Islamist mayor of a tough Paris suburb, who hums Mozart operas and has a Jewish pianist wife. This charismatic graduate of France’s elite Ecole Nationale d’Administration has taught economics at Harvard and whose slogan is ‘The Future Is Now’, is seen by many as the only hope of reconciling and uniting a country obsessed with national identity and plagued by discrimination.

The story meanders through a scene-setting explanation of the wedding party’s dizzying array of characters, their hopes and beliefs, before a shocking revelation of racial violence and the possibility of an imminent terrorist attack. That attack opens this second episode. Chaouch, threatened by Islamist extremists, is shot by a ‘problem teenager’ and lies between life and death – while the completed election count reveals he has become the first Arab president of France.

The Saint-Étienne family dragged into this crisis include Fouad Nerrouche, a TV hearthrob who plays the manager of France’s most popular fictional football team in a hit series. He is dating Chaouch’s daughter, Jasmine. His cousin, 18-year-old Krim, the central character, is a gifted pianist – and the shooter. But the sprawling Nerrouche family is devastated to discover that one of their own, Fouad’s brother Nazir, is the prime suspect in the investigation.

This second volume moves a great deal faster than the first and becomes increasingly addictive as it rips into the French police, politics and justice system, excoriating the rivalries, backbiting, competition, lack of co-operation and downright departmental power struggles. As riots break out all over the country, prosecutors and detectives turn the Nerrouches into political scapegoats and Fouad, Nazir’s diametric opposite, struggles to clear his family’s name.

While fonctionaires battle for control or to attribute blame, one question hangs like a spectre over the affair. Could the attempted assassination have been part of a far-reaching, clandestine plot to alter the course of a nation’s history? Readers will have to wait for the third and fourth parts of the saga to answer that!

Louatah’s vulnerable, flawed characters and often near-luminous descriptions of place and mood have the intensity and resonance of first-class fiction. This stunning work is fluid, complicated and unputdownable.