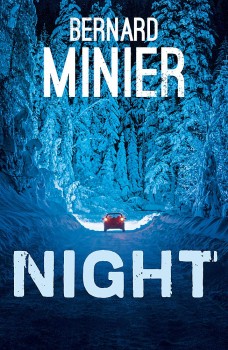 Detectives Kirsten Nigaard from Norway and Martin Servaz from France join forces in search of a notorious cunning serial killer on the run. All clues point to Martin’s earlier personal painful history with the murderer, but this time the life of a five-year-old boy is also at stake.

It’s a pure coincidence that I have just finished watching a French TV series called The Frozen Dead, based on the debut novel by Bernard Minier. It’s good timing as now I have an image of Commandant Martin Servaz in my head which really fits with the oppressive and obsessive atmosphere of Night, the latest instalment of the series.
And even if snippets of the previous events and several significant names are included in book four it’s always interesting to see how the serial killer story has started, and the turbulent times that have followed Martin, his friends, colleagues and women from his past. They’re traumatic experiences to say the least.
Here Servaz becomes involved in a strange investigation, reeking of weird coincidences and behind-the-scenes manipulation, and evolving into an emotional cat-and-mouse chase with the apparently invisible escaped serial killer. It begins with a discovery of a woman’s body in a church on the west coast of Norway. Kirsten Nigaard of Kripos (Norway’s National Criminal Investigation Service) is sent from Oslo to deal with this death as her name was written on a piece of paper in the victim’s hand.
With a colleague from the local police station Kirsten follows the trail to an offshore oil platform in the North Sea where different rules seem to apply. The search of workers’ rooms does not help with finding a murderer but brings further surprises: a set of photographs is found, taken with a long-lens camera and clearly showing that their subject Martin Servaz has been watched closely for a long time.
One of the photos shows a young delicate boy in a beautiful Austrian village. It is signed ‘Gustav’. Kirsten travels to Toulouse in France where emotionally and physically fragile Servaz is recuperating after a nasty encounter with a convicted rapist. This had culminated in a life-changing coma.
The clues point to the notorious cunning and super-intelligent killer Julian Hirtmann, a Swiss psychiatrist who has probably resurfaced after years of being on the run, yet totally off the radar. Kirsten and Martin join forces to search for him, intending to stop more killings, and also to save five-year-old Gustav whose real identity is enigmatic. As the pair struggle to work together and across different countries and cultures, they realise that Martin has much more to lose than anyone affected by Hirtmann, and there are other people willing to pay huge money and serve revenge on the Swiss killer.
Night is more twisty than the nocturnal train route from Oslo to Bergen or the alpine roads in bad weather. It’s also tense and creepy, and full of a constant sense of impending danger. Several descriptions of twisted sex games and tortures favoured by Julian Hirtmann and his secret accomplices are difficult to stomach, and the level of hatred displayed by some characters borders on pathological which is no surprise as the main villain draws the worst from the human nature.
The international aspects of the hunt for the killer, such as ease of travel across the countries after burning all legal and official bridges, obtaining a new identity or access to a top medical clinic, might not be completely accurate but it does not matter in the bigger picture. These elements definitely increase the pace and tension in this gripping book, translated from French by Alison Anderson, and make you totally engrossed in Martin Servaz’s moral dilemmas.