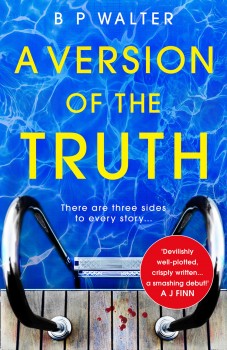 A Version of the Truth

Joanne’s life will go into freefall the moment her son opens the file on his iPad.

Knightsbridge, Christmas 2019. Joanne is already stressing about the impending dinner when her teenage son, Stephen, begs her to look at something he has found on his iPad. Once seen, the vile ugly facts in front of Joanne can never been unseen, never be forgotten, never be denied. Her husband, the one she has loved and believed in for nearly 30 years, is evil.
Oxford, 1990. Holly, newly up to Oxford, is too plain, too ordinary, too common, too poor for the prestigious university. She is also too naïve, so even though her gut says she should avoid Ally and her gang, she slips into their nasty, entitled world and soon becomes their next disposable victim.
One rich, one poor. One living in denial, one suffering from an overdose of reality. Two women, whose worlds flew wide apart nearly 30 years ago, are about to meet again.
This is a most thought-provoking debut novel, although be warned, it contains frequent and graphic scenes of rape, sexual abuse and homophobia. I disliked every character except for Stephen. But for once, they fascinated me with their cruel, heartless, despicable behaviour. The author has not pinned an unpleasant trait on their lapels to make them less of a stereotype or for a shock factor; the characters in this story are obnoxious from the core outwards.
Joanne is a weak, woe-is-me doormat. She is a procrastinator with a penchant for gasping, drinking and vomiting, when she isn’t burying her head in the sand. Holly is bitter, jealous and way too stalkerish to engender sympathy. Ally and her entitled gang are, I am certain, exactly how people imagine the upper-class huntin’, shootin’ and fishin’ brigade must behave now they can’t go chasing foxes!
The bones of the story are potentially yawn-worthily familiar; yet another woman who has been living in denial finds out her husband has a nasty secret. But the two points of view from two distinct characters, using two timelines and the sheer horror of the nasty secret turns the mundane into a vibrant, page-turning tale.
There is excellent atmosphere in each scene, and the darkness is unrelenting. The author has made the different eras clear with brief, time-grounding references. Although I, Oxford born and bred, would like to have seen more reference to and exploitation of the 1990s backdrop, there is a reasonable sense of place.
The novel is not without its weaknesses, including Joanne’s husband leaving the most damning evidence in the highly accessible family drop-box. Yes, it is the turn of events from which Joanne’s story grows (and eventually her character). But it feels contrived and unrealistic, as does the convenience of the ending. But there is so much quality writing and reader emotion-bashing between the start and the end that I can forgive these flaws.
A Version of the Truth reminded me that some books are purely commercial, like mass-produced posters, but some are art, representing a reality with all its warts. This is a humble, written piece of art à la Guernica. It is ugly but bold and thought-provoking and incredibly daring for a debut novel.