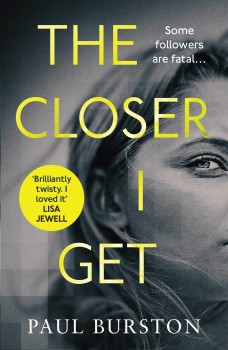 The Closer I Get

Tom never realised a moment’s politeness at one of his book signings would take him to the edge of hell.

In The Closer I Get, author Tom Hunter, has written two books; his first a roaring success that was adapted for film, starring Ryan Gosling. It has given him financial security and a tidy London property. However, Tom cannot sit on his laurels as his second book has been a relative flop that received a bad press.
But ensuring his third novel is as good as his first is possibly the least of his worries, because Tom has an unwanted admirer, harassing him via social media: his very own stalker, Evie. If Tom thinks a restraining order will solve the problem, he needs to remember the quote, "Heav'n has no rage, like love to hatred turn'd, nor Hell a fury, like a woman scorn'd."
Tom decamping from London to Hastings won’t stop Evie’s pursuit – it will push her to step out from the shadows. And there is only one way this can end.
This is a delightfully nasty little book, which is exactly what bookshelves cry out for; a disturbing psychological thriller that is entirely up to date. It is a wonderful reminder that social media is as dangerous as it is enlightening, and that unwanted attention is beyond tiring; it emotionally unravels the receiver.
Paul Burston manages to establish the characters of Tom and Evie fast, giving the reader a clear view of the victim and his aggressor. Evie is a deranged, clearly psychotic character, so controlled and swathed in self-righteous confidence that she doesn't even understand how disturbing her actions are. She is adamant there is a strong and affectionate bond between herself and Tom, certainly more than he will admit to. She denies her problems to her court-appointed therapist, but her journal oozes insane rationalisations and gels perfectly with her obsessive actions. The chapters devoted to Evie are in the first person and extremely intimate, and her convictions make her rounded and utterly believable.
The chapters devoted to Tom are in the third person, which distances the reader from this rather unlikeable protagonist. He is arrogant, self-absorbed and almost more self-righteous than his antagonist. Burston may have flawed him too much, as I found it extremely difficult to connect, let alone empathise with Tom. Despite the authenticity of his reactions and actions to Evie’s stalking, I am not sure they are entirely convincing, because of his character.
Evie’s father is flat, as is her therapist; they are stage props. Tom’s friends, Emma and later, Colin, are more rounded and likeable. Although the story starts in London, it shifts to Hastings part way through, and the author turns this milieu into a convincing character in its own right – disturbing, menacing, beautiful and ugly in equal measures. Its drama and tension add to the slow-building crescendo of dread.

This is a great study in the dark nature of obsession – how easy it is for a disturbed person to misread a simple action. The behaviour and quirks of the main characters are instantly recognisable and worryingly accurate. Although the ending comes from almost nowhere, there is subtle foreshadowing. Sadly, I feel the rather hurried and anti-climactic ending let the story down. That said, Burston’s writing style is sharp, confident, and if this is an indication of his stories, I will happily put him high on my list of preferred home-grown authors.