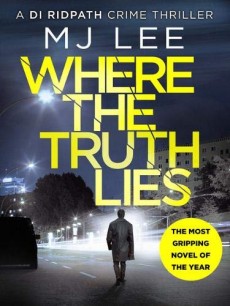 Where the Truth Lies

An empty grave. An old murder. DI Tom Ridpath must find his way through new tasks and old loyalties to find the truth about a serial killer stalking the streets of Manchester.

'A coroner's officer is an advocate for the dead to safeguard the living.' DI Tom Ridpath has returned to work after a brush with cancer. On his first day back he is seconded to the Coroner’s Office for three months with strict instructions to keep an eye on his new boss, the redoubtable Mrs Margaret Challinor, and report back to his old boss DCI Whitworth.
His first job as Coroner’s Officer entails the exhumation of the victim of a killer he and Whitworth put away. When the coffin turns up empty Ridpath must start investigating an old crime. And he needs to hurry, because the killing has started again.
This is a tense, exciting story set very much in the real world – I used to live in Manchester and the locations are spot-on. Ridpath is finding his feet in his new role and negotiating the changes in working relationships that this entails. He has to fight to investigate the missing body, while butting heads with his old colleagues when this encroaches on a current murder investigation.
The chapters are short and leave you wanting to start the next one as soon as you’ve finished the previous one. Ridpath is a sympathetic protagonist, not perfect by any means, but human in his struggle with his recovery from cancer and determination to see justice done. I also enjoyed meeting Challinor, who, as an intelligent and principled woman, is an attractive character and one I’d like to see more of.
The police are less attractive. We see enough casual misogyny in the police offices that I had one pegged as a suspect.
And I would like to add a content warning. There are graphic scenes of extreme violence against women included in the book.
This is a good first story in a series with DI Ridpath. Somehow, I think his temporary assignment to the Coroner’s Office may well become permanent. And that’s a good thing.