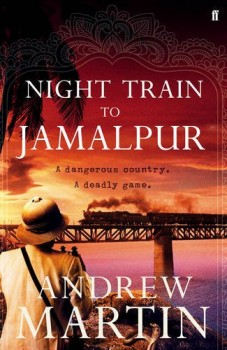 Captain Jim Stringer is in India in 1923 to counter railway corruption, but a death and a series of deadly snake attacks redirect his efforts.

Captain Jim Stringer has exercised his skills as a detective in several previous books: in his latest exploit he is seconded to Calcutta in 1923 to investigate corruption in the operation of the East Indian Railway. His attention is diverted, however, when during a railway trip a man in an adjoining carriage is shot dead. A further distraction is that someone has been leaving venomous snakes in first-class carriages on the EIR, resulting in a series of deaths.

What immediately comes to mind is the ease with which the author creates a 1920s Calcutta which feels entirely authentic. Although in no way didactic, Martin is master of the telling detail which brings his characters to life and sets them in a wholly believable landscape. That this is done so effortlessly is impressive, considering the range of topics covered: social mores, language, the conflicts between the various classes, railways, golf, snakes, even advertising signage.

Stringer makes an interesting protagonist, perceptive and sensitive to very subtle clues. The story is told in the first person and relates his actions and something of his thinking, but leaves much for the reader to surmise. In his work and in his home life, Stringer is ready with mistrust and formulates suspicions which frequently seem insufficiently well grounded. As a professional inclination, such tendencies may lead to results, but tend to be problematic in his personal life.

In fact, Stringer is in India with his wife and daughter and, rather cleverly, the picture of the man is modified through their voices as reported by him. His wife promotes female liberation, and Indian national liberation also, a particular potential cause of embarrassment for her husband. The daughter is a willful teenager with enthusiasm for a young raja, giving rise to anxiety. Both wife and daughter emerge as characters in their own right with a few deft touches.

It is perhaps only with Stringer’s detective work that there might be reservations. He barely spends a minute on the task which ostensibly brought him to India, and in his investigations of the murder and into the matter of the snakes he runs into no serious objection from the properly-constituted authorities. His list of suspects seems very small and remarkably quickly identified, given his recent arrival.

Making due allowance for the genre, these aspects are, however, easy to overlook, especially when balanced against the overall first-class quality of the writing, the excellent dialogue and the convincing evocation of a lost world. Previous novels in the series, beginning with The Necropolis Railway have been shortlisted for, or won, crime awards, and it is easy to see why.