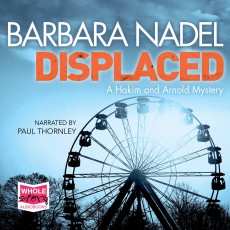 East End private investigators Hakim and Arnold take on a very cold case when they are asked to find an elderly man’s sister, abducted from her pram at a funfair many years previously.

For several generations, the Levy family have traded and cut diamonds in London’s Hatton Garden, but everything elderly, terminally ill Irving Levy thinks and believes is turned upside-down when he discovers that his mother was not actually Jewish, meaning, under orthodox thinking, he is not a Jew either. Irving has no children of his own, and so does not know who should inherit his own fortune. He decides to go in search of his mother, and also wants to find his younger sister, who disappeared as a baby.

All Irving knows about his mother is that his father met and married her in Berlin during the war. All he knows about his sister is that she was abducted from her pram while their mother was at a funfair in Barking Park. Despite an extensive search, baby Miriam was never found. In an attempt to solve both mysteries, Irving engages the services of East End PIs Lee Arnold and Mumtaz Hakim.

Lee and Mumtaz are intrigued by the two mysteries and start to delve into the past in search of answers. It quickly becomes clear that very little Irving believes is actually true. But despite their best efforts, no headway is made with their enquiries into the disappearance of his baby sister, much like the lack of leads at the time Miriam went missing.

Paul Thornley’s very able narration complements Barbara Nadel’s excellent plots and brings the characters vividly to life. Nadel’s ability to sharply depict a cast of very diverse individuals is a great strength of the books, and although I’ve jumped forwards and backwards in time by listening to the series out of order, that hasn’t affected my enjoyment and, with Displaced, I’ve finally caught up with the whole series. All necessary backstory is present, even though it does seem to be growing apace as far as Mumtaz’s troubles go.

The travelling fair around which much of the book revolves is a key player in Displaced, as it’s likely that the key to Miriam’s disappearance lies there. The elderly, bedridden Bela Horvathly positively exudes malice in all his appearances, and there are also the sinister conjoined twins known only as Ping and Pong, who appear without speaking. The only bright spark amongst the close-knit Hungarian family is the teenage girl who is determined to defy her family and become a trapeze artist.

As ever with a Hakim and Arnold story, Displaced intertwines numerous seemingly unrelated strands, all skilfully handled, and one of the pleasure of the books is that the mysteries are about far more than the murders. The plots are rich and complex, with characters that I can - and do - care about. I want to see Mumtaz find her way out of the clutches of the unpleasant Sheik clan, and I’d like to see her and Lee regain their previous working relationship, threatened now by an ill-judged one night stand.