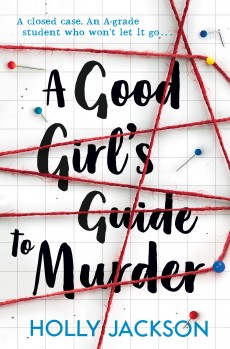 A Good Girl's Guide to Murder

Pippa Fitz Amobi has to do a project alongside her A-levels, so she decides to look into the murder, five years ago, of one of the girls from her school. As far as everyone is concerned Andie Bell’s murder was an open and shut case, but Pippa isn’t so sure…

Five years ago, popular teenager Andie Bell was murdered. Although Sal Singh committed suicide before coming to trial, the case is closed so far as the police are concerned, and the inevitable trial by media resulted in Sal’s conviction. Everyone in the town of Little Kilton believes that Sal murdered Andie. Everyone, that is, except two people: Sal’s brother who wants to clear his dead brother’s name and A-level student Pippa Fitz Amobi, who wants to work on the case for her Extended Project Qualification at school. She doesn’t believe Sal is guilty either, and she’s determined to prove Sal’s innocence.

A Good Girl’s Guide to Murder is a stunning debut from Holly Jackson, who weaves a case every bit as complicated and multi-layered as anything by the King and Queen of Crime Jeffery Deaver and Val McDermid. Interwoven with a third person narrative focussing on Pippa are entries from the log she is keeping for her project. These provide a helpful point of reference in a story that never stoops to information dumps or clumsy recaps where two characters bring each other up to speed with the plot.

Pippa quickly realises that very little in the Andie Bell case fits with the public perception of her murder, and it equally quickly becomes clear that there’s someone in the town who doesn’t want her to continue digging. Pippa is something of a force of nature when it comes to doggedly pursuing a trail. She’s bright, tenacious and courageous. Her friendship with Sal’s brother Ravi gains an easy camaraderie as the two delve ever deeper into the web of lies that has been woven around the dead girl like a silk cocoon.

Everyone remembers Andie Bell as the town’s golden girl, but the more Pippa delves into the case, the more that protective cocoon starts to unravel, showing a very different side to Andie. Pippa’s log entries vary from transcripts of interviews to her own thoughts on the case and make completely fascinating reading. There are also records of text conversations and emails, all of which add to the complexity of a story that never slackens its grip for a second.

Pippa makes an excellent protagonist, with Ravi as a sympathetic sidekick. The dialogue is sparky and the large cast of characters is well-drawn, with the log entries providing helpful recaps where needed. The plot is one of the most complex I’ve read for a while in the young adult field, and A Good Girl’s Guide to Murder sets a high bar for any other teenage sleuths to jump. Indeed, there are plenty of adult investigators who could pick up some tips from the indomitable Pippa. The characterisation of both the teens and the adults is knife-sharpe and the plot moves at a tremendous pace. This is a hard book to put down, so be prepared to settle down on a comfortable sofa with plenty of snacks to hand while you enjoy the ride.