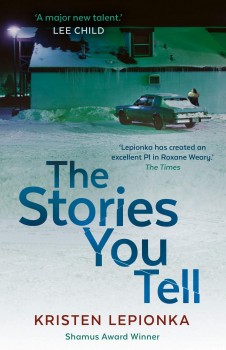 The Stories You Tell

A phone call in the middle of the night never brings good news, and the one private investigator Roxanne Weary gets from her brother is no exception to that rule, especially when he was the last person to see a missing woman.

When private investigator Roxanne Weary gets a phone call from her brother Andrew in the middle of the night, she knows it’s going to spell trouble, but she still goes running to help him. His story is that Addison, a woman he had a brief fling with, turned up on his doorstep, drunk, dishevelled and blood-stained. When he tried to find out what was wrong, she became hysterical and ran off.

It doesn’t take Roxanne long to discover that Addison, a DJ at a sleazy nightclub, is missing and that Andrew is the chief suspect. Her attempt to clear her brother’s name takes her deep into the murky online world of dating apps and involves her in a facet of modern society she knows little about. But she’s on safer ground when it comes to using her investigative skills to interview those close to Addison. Add a dead cop to an already cloudy picture, throw in an organised crime boss, mix well, and you end up with a thick fog that’s not uncommon in the Ohio winter that acts as an icy backdrop for the third Roxanne Weary book.

Roxanne herself is the big draw in the series. She’s a feisty, intelligent and very, very sarcastic. Her relationship with her girlfriend is cooling and she’s somewhat down on her luck in the work department, with her main job at the moment being an attempt to track down some counterfeiters ripping off a brand of designer leggings. That investigation seems to have stalled, so she has the time to devote to solving her brother’s problems.

Her investigations bring Roxanne into contact with a variety of people who knew Addison, none of them particularly likeable or memorable, and there were times when I struggled to keep the various characters clear in my mind. Roxanne’s musings on the investigation and its various twists and turns were plus points enabling me to keep up with the plot, but for all that, I enjoyed clever web Kristen Lepionka weaves around her main character.

Roxanne is still drinking too much and very definitely isn’t over the death of her father, another cop, killed in the line of duty. His former partner, Tom, is there to help her out when needed, and on occasion is more than just a friend. Her girlfriend Catherine is little more than a distant presence, never really becoming real enough for me to care about her, although I might have been hampered there by not having read the second part of the series.

Lepionka tells a good tale, and her depictions of Ohio in winter add to the chills as Roxanne finally starts to unravel the events that led up to Addison’s disappearance. The climax is both unexpected and gripping, bringing a convoluted story to a satisfactory ending. Roxanne’s personal baggage never threatens to derail the story and there is a sense that she’s moving on. This is good, old-fashioned private detecting.