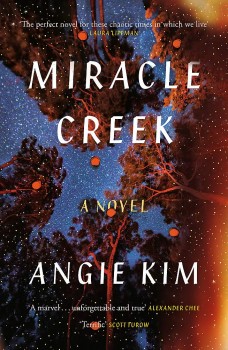 A fire and explosion in a therapeutic hyperbaric oxygen chamber kills two and injures others. As a trial begins, the preoccupations of those close to the tragedy fear that personal secrets will be exposed.

This terrific first novel is centred on a family relocated from South Korea to Miracle Creek in rural Virginia: Pak Yoo, his wife Young and their teenage daughter Mary. The family run the Miracle Submarine, a pressurised oxygen chamber providing an alternative therapy for conditions including autism and infertility.

The opening of the book coincides with that of a trial, of Elizabeth, the mother of an autistic boy killed when the oxygen supply caught fire and the chamber exploded. The mother of another patient who was also inside the chamber was killed, and a doctor, Pak and his daughter Mary were all badly injured. The book progresses by chapters voiced in turn by persons close to the event.

It emerges very quickly that the genesis of the explosion is anything but simple. All of the narrators have matters which they are desperate to conceal, although believing that their minor peccadillos are of minimal importance to the outcome of the trial. It is only towards the end of the book that it becomes clear how a combination of human faults and dishonesties can combine to produce such a dreadful outcome.

The revelations of many of the participants are often very moving, particularly so in the case of Elizabeth and of Teresa, the mother of another child, brain-damaged by a virus. These mothers are martyrs to their children and the reader can have nothing but admiration and empathy for their unstinting efforts. Elizabeth is widely hated for being tough on her child, but her obsession with his recovery has achieved results beyond that ever expected by his doctors.

The thinking of the other contributors is also laid out so sensitively that the behaviour is entirely understandable. The Yoo family were separated for four years, the father Pak remaining in Korea to fund his daughter’s chance of a better education; his wife working such long hours in US that she never saw her daughter Mary, while Mary feels isolated and disliked in a new country with minimal parental support. The challenges of Koreans attempting to relocate to an alien culture are made explicit.

The story of the disaster twists and turns from the beginning, and the reader’s perceptions continuously change with successive revelations, mirrored by those of the jury as new evidence is introduced. The prosecuting attorney Abe and Elizabeth’s lawyer Shannon are fiercely combative in court and sparks fly; there is no pretence that the case is about truth but rather the harnessing of any facts that can be found to substantiate the preferred version of events. The whole makes for gripping reading, with characters whose concerns are brought vividly to life.