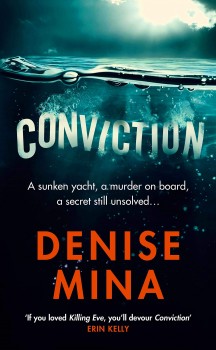 Barrister’s wife Anna McDonald tries to console herself over the loss of her husband and children to the woman she thought her best friend by investigating the death of a former friend, but in doing so must face a threat from her own past.

Glaswegian Mina made her name with the Garnethill trilogy, the Paddy Meehan series and the stories featuring female DI Alex Morrow. Her greatest strength is that she never allows her intelligent stories to break the bounds of possibility and her principal characters are deeply rooted in reality.

The world of Anna McDonald, the wife of a comfortably wealthy senior barrister, falls apart on what should have been a normal morning. As she gets her two daughters ready for school, her best friend arrives at her door and her husband comes downstairs with a suitcase to announce the two are leaving together – and taking the girls on a holiday with them to adjust to their new situation.

Anna can’t take it in. With her safe, predictable world shattered, she tries to distract herself by listening to a true-crime podcast – an obsession she has used to relieve boredom or bury unpleasant events. The story she hears is a mysterious tale of a yacht sunk off the Ile de Re, that chi-chi French island resort between La Rochelle and the Bay of Biscay. On board were a father and his son and daughter from separate marriages.

The French police have arrested, charged and convicted the yacht’s former chef, conveniently the daughter of a former left-wing terrorist. But the woman was on a flight to her home in Lyon when the yacht left harbour – and there are hints of powerful influences and police corruption.

Anna realises she knew the dead father in another life. She also knew his new wife – a multi-millionaire woman football club owner from a family with strong past Nazi connections and a dubious business record.  She cannot ignore the murder of a man she once considered a friend, but investigating the case will mean her past, which she has worked so hard to wipe out, and present life will collide.

On her twisting, fast-paced, darkly comic, thrill-a-minute ride journey around Europe, she comes face-to-face with killers for hire, aided only by the anorexic, psychologically disturbed former pop-star husband of the woman who has taken her children.

Mina, who does not waste a single word, is astutely perceptive of human nature and the intricate and psychologically complex backgrounds of some of her characters make this a real thriller – possibly her best to date – as this intricate and complex tale evolves through a series of emotional and edgy twists towards a surprise ending.