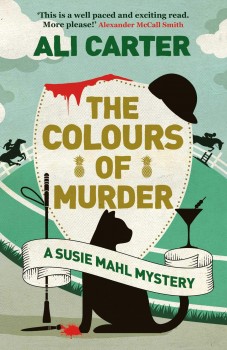 The Colours of Murder

Artist Susie Mahl exploits remote aristocratic relations to get an invitation to a Norfolk country house party. When a guest dies in mysterious circumstances and police accept the obvious explanation, she sets out to uncover a killer.

This whip-smart, pacey, yet at the same time effortlessly genteel Christie homage is a more than welcome return for Ali Carter’s artistic amateur sleuth Susie Mahl.

If you don’t understand the difference between a gentleman’s country house and a stately home, some of her upper-crust humour and candid observations on the British social classes may leave you a little lost. But her insights into the artist’s craft, mixed with a strong dose of less refined humour, make this an absorbing, charming and funny read you won’t want to put down.

Some social manipulation by Susie’s mother, who would like to see her 30-something daughter happily well married off – don’t worry, the convoluted trail of the goddaughter of her second cousin once removed confused me too – brings Susie to the attention of eligible bachelor and baronet’s son Archibald Barnabas Cooke Wellingham, who is short of a final female to make up the party for his summer weekend at Fontaburn Hall.

Despite the tenuous link, the firmly middle-class pet portraitist is already in the area having been commissioned to draw National Hunt trainer Aidan McCann’s favourite horses. Although Susie isn’t much interested in the class or status of Norfolk’s elite, she accepts, looking to acquire a few commissions, or at least get some good stories for Dr Toby Cropper, a hopefully more-than-friend she collaborated with during the events that led to her earlier venture into detection in A Brush With Death.

Archie’s other upper-crust guests largely ignore her, but after an evening involving drinking games, Hailey Dune, a flirtatious American, is found dead in her bed.

The general assumption is that she drank so much it killed her – a major embarrassment for Archie, but little more. An initial post-mortem seems to confirm that drink had aggravated an existing medical condition and the police are happy to accept that and close the inquiry.

Susie’s inquisitive nature and her tenacity in pursuit of the truth, leave her dissatisfied with their conclusion – and an extended visit from Toby raises her hopes the two can again co-operate in a private investigation. But Toby’s stay does not produce the romance-sparking atmosphere she had hoped for, especially since he seems to be getting on so well with flirtatious stablemaid Lucy, Susie’s temporary landlady!

Her artist’s eye for detail makes Susie ideally suited for the task she has taken on, but is she getting carried away by her previous success to the extent of not only endangering her reputation but also her burgeoning relationship with Toby?

Susie is everything a cosy detective should be – absorbing, witty, warm, charming, funny and endlessly inquisitive. Carter has created a character Agatha Christie would be proud of – a sort of 21st century Jane Marple, although it is hard to imagine what that most correct and starchy lady would have thought about Susie’s passion for racy French silk underwear!

There are a couple of minor blips. The idea that a point-to-point mare, however good, who has not yet run under National Hunt rules, could top the legendary Golden Miller’s five successive Cheltenham Gold Cup wins from 1932-36 is beyond belief. And the final paragraphs, in which Carter seems confused about the powers of magistrates and crown courts, just don’t make sense.

Her publishers have signed Carter for a series of three books. The first was good, this clever piece of social commentary, well-plotted, absorbing, charming and funny, is even better. I can’t wait for the third in the trilogy – and hope it will not be the last.