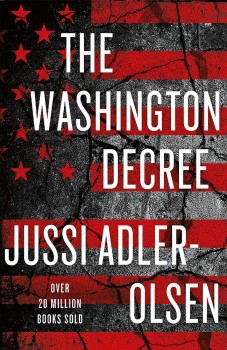 American president Bruce Jansen orders radical measures after his pregnant second wife is assassinated and the country lurches into chaos. Has he suffered a mental collapse or is he being manipulated?

This timely thriller offers a terrifying glimpse at what could happen should an American president act to serve a personal agenda instead of the people. Given the political present in America, it offers a valuable message – and not just for Stateside readers. The plot will no doubt resonate with some, others will absolutely hate it – something to be expected in a story built around multiple contentious issues. The most amazing thing about this story is that it was published in Denmark in 2006. Events since then have made it increasingly more relevant, thought-provoking and alarming.

The Federal Emergency Management Agency, an agency of the US Department of Homeland Security, was created by Richard Nixon in 1978. Successive presidents have added to its powers – particularly after 9/11 – to make it the most powerful single organ in America with the power to override or suspend the constitution; arrest and detain citizens without warrant; imprison without trial; confiscate and take control of property, food distribution and transportation and other draconian measures. Congress has no influence over FEMA duties, budget, strategy or development – all controlled by presidential executive orders.

The senator goes on to win the Democratic nomination and the presidency. For Dottie, who worked the campaign trail with Wesley, Jansen’s election is a personal victory with a job in the White House, proof to her Republican father that she was right to support Jansen, and the rise of an intelligent, clear-headed leader. But on election night Jansen’s pregnant second wife is assassinated – and Dottie’s father is named by the FBI and Secret Service as the mastermind of the shooting.

Jansen’s grief makes him determined to end gun violence by any means. Rights are taken away as quickly as America’s weapons. International travel becomes impossible. Checkpoints and roadblocks destroy infrastructure. The media is censored. Militias declare civil war. The country is in chaos. Jansen’s former supporters find themselves fighting for themselves, their rights and their country – and, in Dottie’s case, her father’s life.

This dark dystopian tale of how fragile democracy can be and with its all-too-real scenarios takes a long time to get going. Also, there are some inaccuracies, most likely due to translation. At 600 pages it could be too long and complex for some with Jussi Adler-Olsen’s trademark ploy of parallel plots expanded to cover numerous sub-stories which at times provide a distraction from the main issues of tyrannical abuse, outrage and search for justice.

This powerful parable of honest people caught in the corruption of our times and a chain of events that leads to radical change and leaves the DHS, FEMA and the military vulnerable to misuse, with all constitutional guarantees revoked, may appear far-fetched. But as a warning of how democracy can be changed to autocracy, this entertaining and exciting rollercoaster should be a must for every student of international events.