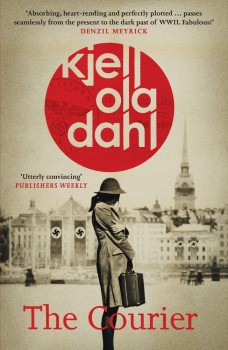 In 1942 Jewish courier Ester is betrayed in Oslo but manages to escape the Norwegian Gestapo. In Sweden she meets resistance hero Gerhard Falkum, but their tentative relationship is cut short when he dies in a fire. Yet 25 years later he suddenly reappears.

In October 1942 a young Jewish woman, Ester Lemkov, works as a courier for the Norwegian resistance movement and narrowly escapes arrest by the local Gestapo taking over Oslo. She is betrayed and still alive, yet in danger as a marked woman. Her family’s terrible fate is sealed immediately as they are all being deported to Auschwitz. Luckily, thanks to the brave underground people, she manages to escape to neighbouring Sweden.
On the last evening before fleeing, Ester meets her best friend Åse, a young mother who is in a relationship with the resistance hero Gerhard Falkum. Within weeks she is in Stockholm, helping refugees from her homeland, and continuing the fight against the Nazis. Soon she is tasked with assisting Falkum who has left behind his country and little daughter, and fled both the Germans and allegations that he has murdered Åse.
Ester is heartbroken and shocked, and refuses to believe the accusations, as she sees a damaged but an honourable, frustrated and angry man, wanting to be a soldier again and to clear his name, hoping to get to England Their tentative relationship has no prospects of flourishing, though. Then Falkum dies in a fire.
Yet in 1967 he suddenly shows up in Oslo to reconnect with his daughter. His sudden reappearance shakes the long-established beliefs of Ester, her wartime boss and of other people who have been involved in countless secret missions over the years. Falkum’s daughter doesn’t realise how the intricate web of undisclosed unspoken and implied words have shaped her own life, and those around her. Nobody knows whether the changed man is a hero or a foe.
As the conclusion approaches, Ester, not really a quiet mouse of a piano teacher, and Sverre, hiding a multitude of official secrets, separately revisit the past and dig deep to find out the real reasons for Falkum’s return, and what has been happening, also behind a hushed investigation into Åse’s killing. The finale is both appalling and tragic, and demonstrates how insightful and sensitive a storyteller Kjell Ola Dahl consistently is.
The Courier, in a superb translation by Don Bartlett, isn’t just an atmospheric thriller with superb plotting and excellent authentic characters, coming alive in every situation. The novel deals with one of the most horrendous and painful periods in modern history, World War II and its aftermath. The complexity of the tense plot allows for the alternations in pace as time seems to be flowing differently during the war and after a 25-year gap, and also in some episodes that happen in 2015, following the political and social changes.
Silence speaks volumes and tension pulsates in every sentence as Dahl leads his main characters and the readers through various stages of an intellectual and emotional journey. He does not judge any of the actions, simply giving enough psychological context and historical background for the readers to come to any conclusions they should wish to. The fragility of moral decisions in the circumstances isn’t questioned because it would be impossible to be in people’s position, fictional or not. This is a murder mystery with a totally unbalanced moral compass.