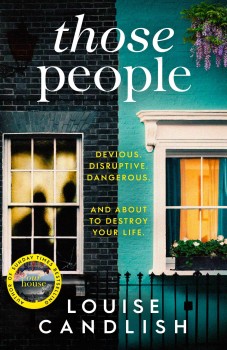 Lowland Way is a comfortable, suburban street, with hedges and neat, substantial houses. The neighbours are proud of their community. They have introduced a regular road closure for the children to play safely in the street. They protect the security of their street. They jealously guard the trees and buildings and walls to ensure that the integrity of the heritage of the street is maintained.

Then, one day, a new couple move into the corner house. They callously demolish a wall. They cut down trees. They play loud music all day and night. They wear dirty overalls. It becomes clear that they are running a used car business from their house.They do not respect the street closure. They just don’t fit in. And the neighbours are incensed.

A young couple struggling with a new baby who doesn’t sleep well live next door to those people. Loud rock music all night doesn’t help. Opposite lives an older lady who is running a bed and breakfast business to enable her to continue to live in this street. Those people cause her to get bad reviews and her business suffers. Further up the road, next door to each other, live two brothers and their families. The wife of one is self-styled ‘queen of the street’ and she does not like what is happening. Her control of the street and significantly her control of her brother-in-law’s family slips away.

Then one day scaffolding collapses at the house of those people and someone is killed. Suspicion points in so many directions.

This book is really well crafted. The security and comfort of the street is merged seamlessly with the pretensions, the upwardly mobile aspirations, the affectations and the complacency of the wealthy, nouveau riche, middle class inhabitants. They find the new arrivals, those people, incomprehensible because they do not appear to share any of their values. The book really explores this circumstance and the character development is handled extremely strongly. At times the atmosphere makes very uncomfortable reading as the writer forces the reader to consider how they would respond in such circumstances.

There is a plot, and a very good one. The whodunit part of the story is riveting. Layers of clues and hints and suggestions keep you guessing, and I found myself unwilling to stop reading because I wanted to know which of the outraged neighbours had caused the catastrophe. In fact, this idea of the cause of catastrophe is explored much more widely and is caught up in the descriptions of attitudes and behaviours and what caused it all to go wrong and the bigger question of whose fault this really all was. Those People is well worth reading.