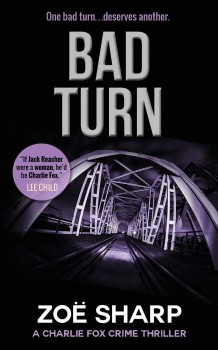 Charlie Fox is jobless, homeless and blacklisted in the close-knit world of close personal protection, so when a new job finally comes her way, she’s in no position to refuse, even if all her instincts are telling her to run and not to look back.

Charlie Fox, the UK’s answer to Jack Reacher (no, I didn’t think that up for myself, but it does fit!), is back for her 13th adventure in Bad Turn. Fresh from the events in Bulgaria that reached an explosive climax in Fox Hunter, Charlie resigns from her job in close personal protection with the Armstrong-Meyer agency. Parker Armstrong, who’s been after a closer relationship with Charlie for a while, doesn’t take it well, and within a month, she finds herself homeless, jobless and blacklisted on the bodyguarding circuit.

Charlie retires to the backwaters of New Jersey to lick her wounds, house and cat sitting for two friends. She’s not expecting to see any action there, but is in the wrong – or right – place at the wrong time and helps to foil a nasty kidnapping aimed at Helena Kincaid, the wife of wealthy businessman Eric Kincaid, who promptly makes her an offer she can’t refuse. Kincaid’s own bodyguard and head of security, the enigmatic Schade, doesn’t exactly welcome her with open arms, but then again he’s not particularly hostile, which is as good as things are likely to get.

As ever, there are deeper machinations at work, and Charlie finds herself to be a cat’s paw in a very dangerous game. Kincaid is believed to be selling arms – and possibly even nastier weapons – in the Middle East, and there are those in government who want an eye keeping on him and his business empire, and the person with eyes on just happens to be Charlie.

Whenever I turn the first page on a Charlie Fox novel, I know that her creator is going to serve up a complex, fast-paced military-grade action romp than can hold its head high in the male-dominated thriller world. Charlie Fox is perfectly capable of toting a gun with the best of them and can deliver a swift kick in the balls to anyone who makes the mistake of underestimating her. The thing I like most about Charlie, though, is that she doesn’t play the macho posturing game. She’s calm, controlled, analytical and very, very dangerous, which is fortunate, as she’s up against some tough opposition in Bad Turn.

I immediately fell for the equally dangerous Schade, who makes a great foil for Charlie in their razor-sharp dealings. Schade’s job is protecting Eric Kincaid, and it’s a job he takes very seriously, so when one of Kincaid’s business rivals seems to be prepared to tear up the rule that says family members are considered strictly off-limits, he’s prepared to accept Charlie coming on board with the remit of protecting Helena. She takes a little more convincing, but Charlie quickly proves invaluable in the high-stakes games that follow the kidnap attempt.

Throw in elements of organised crime, chemical weapons and arms dealing and what follows is a classic thriller with several very impressive shoot ‘em up scenes that call for all of Charlie’s nerve and improvisational skills. Bad Turn barely pauses for breath, even in the small amount of down time between gun battles, but manages to avid falling into the One Damn Things After Another trap. The action moves smoothly to Europe, shifting fluidly from Italy to France, testing Charlie’s nerve under fire to the limit.

Don’t ever make the mistake of thinking you’ve sussed out what’s going on. The rug got neatly whisked out from under my feel on several occasions and after a while I just settled down to enjoy the ride, rather than trying to keep track of the apparently shifting tensions and loyalties.