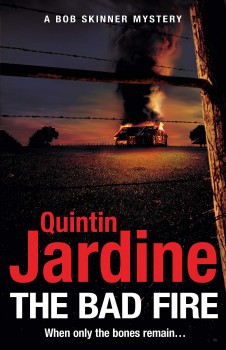 A case from nine years ago turns out to be anything but cold, as Alexis Skinner finds out to her cost.

Nine years ago, a woman accused of shoplifting was found dead the day before her case was due to be heard in court. Everyone assumed she had committed suicide but now her former husband wants the case looked at again, and he’s approached his friend, former top cop Bob Skinner, who in turn refers the case to his daughter Alexis, who’s been making a name for herself as a criminal defence solicitor-advocate.

Alex Skinner asks investigator Carrie McDaniels to make some enquiries on her behalf to see what falls out of the tree. What no one is expecting is a violent assault aimed at Alex in her own home and the subsequent disappearance of McDaniels. With his daughter under threat, Bob Skinner is taking no chances with her safety and, for once, Alex goes along with what her father wants.

I’ve been following the adventures of Bob Skinner and his merry band of coppers for more years than I care to remember. There have been times when I’ve felt I’m falling out of love with the series, particularly when his creator decides to tell a story with Skinner as the narrator. For some reason that I can’t quite put my finger on, those stories never work for me, partly because I just don’t hear Skinner that way in my head, so it was a relief to open the latest instalment to discover that the only passages in the first person are from Alex Skinner’s point of view, and not that of her illustrious dad, now Sir Robert Skinner.

First, a confession … I’ve never been much of a fan of Bob Skinner’s eldest daughter, perhaps something to do with the fact that her dad has her on a pedestal quite a bit higher than Nelson’s column, but in The Bad Fire I found myself warming to her for a change. Maybe because for the first time we see her dealing with a threat that’s physical rather than emotional, and for once she’s on the back foot, her thoughts and feelings laid bare as she struggles with the knowledge that Carrie McDaniels’ disappearance is connected with the investigation into Marcia Brown’s apparent suicide.

As ever, Jardine handles a large cast with relative ease, although he does tend to have a somewhat heavy hand when it comes to explaining who’s related to who. Also to the forefront in this book is an obsession with characters’ nicknames, some of which come over as contrived, to say the least. New nicknames spring up like mustard and cress on a wet flannel. We’ve had ‘Sauce’ Haddock for a while, but now anyone and everyone gets a new name to add to their CV.

I always enjoy the way Jardine brings back characters from earlier books, and it’s nice to see my old friend big Lennie Prenderleith turn up again as well as the slightly shady ex-copper Terry Coats. I think we’re fast reaching the stage where someone needs to put together a very large family tree setting out how everyone is related to each other, but until that happens, we’ll just have to rely on the in-text explanations, even though they are threatening to overwhelm the reader with detail!

The plot is vintage Jardine, though, and it took quite a while for things to get disentangled. There are some genuinely macabre moments to add depth to the investigation and the story moves on at a decent pace.

I can’t help thinking that Jardine might have lived to regret letting Skinner resign before taking on the top job in the unified Police Scotland, as since then Skinner has turned his hand to the work of a private investigator and flirted with work for the security services, and now he’s back on board with the polis in the role of a special constable helping mentor others whilst reporting directly to both Mario Maguire and Chief Constable Maggie Rose Steele, both Skinner’s proteges when he was in the job. This gives Skinner a relatively free hand without straining credulity too far.

I keep wondering when I’m going to get disenchanted with the series, but it hasn’t happened yet, and on this showing, there’s plenty of life left in Big Bob.