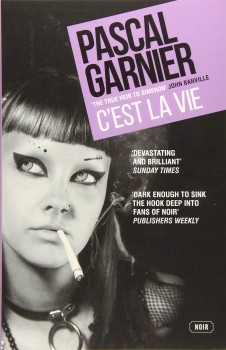 Writer Jean-Francois Colombier accompanies his son on a trip to Lille and is unexpectedly plunged into a nightmare.

This slim volume features a writer, and it is hard not to suspect that Garnier’s creation owes at least something to his creator, but in any event he comes across as a very likely Gallic character. Colombier is a writer who came by success quite late and to his surprise. He has difficulty in taking his recent fame at all seriously and is cynical about that and indeed much else in life.

A couple of failed marriages in his wake, he is now living with a much younger woman in comfortable circumstances, but finds his life perhaps too settled to be easy. In any event he makes a sudden decision to visit his son, who is supposedly a musician although kept afloat mainly by monthly cheques from his old man, supplemented by dealing a little cocaine.

The son, Damien, is about to set off for Lille and suggests his father come along. The pair drive down together, stopping only briefly at a service station where Colombier meets Billot, a dwarf, who proffers his card. They arrive at a large house where some kind of party is in progress. Colombier feels rather out of place but eventually runs into an attractive young woman, Agathe, and the two depart for a restaurant.

Colombier is discomforted when Agathe makes off with his wallet. In a strange town with no friends he telephones Billot who as luck would have it lives nearby. Billot seems very willing to be helpful, but as it turns out, not so much. Events take a decidedly odd and macabre turn.

It has been my experience that writers in literature frequently come across as self-indulgent, but this is not the case here – rather more that Garnier, if indeed he does resemble his protagonist, is making a joke at his own expense. It turns out that Colombier is more than willing to trade on his reputation when this will help relieve his predicament, even to the extent of sounding quite pompous. There is a great deal of amusement to be had from his discomfiture.

This touch of black humour is familiar to readers of Garnier, usually accompanied by some rather gruesome outcome from initial circumstances featuring unremarkable persons. The sense of sudden departure from the mundane everyday to the weird and twisted is not uncommon.

More than that it is not easy to generalise: his range of characters is wide and the plots are full of unexpected developments. For surreal noir Garnier is hard to beat.