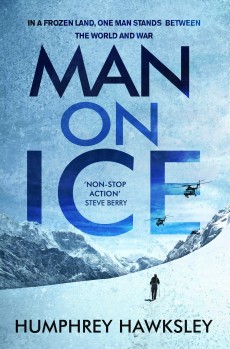 A change of leadership in both the White House and the Kremlin provides an opportunity for ambitious men. A miss-step could lead to nuclear annihilation, and a man on the ice becomes the key.

This is a story of high politics, and of a few people who happen to be at a remote location which becomes a flashpoint – the Diomedes islands in the Bering Strait, on the boundary between Russia and Alaska. It is a thriller reminiscent of Alistair MacLean and Hammond Innes, while being bang up-to-date and sounding all too plausible given current international friction.

The action takes place over the 48 hours before the inauguration of Hammond, a hawkish and inexperienced US president. The Russian leader is also new in post, and has been receptive to plans formulated by Vitruk, military commander of Russia’s Far East. His intrusion across the boundary is represented as a rescue mission of a girl in dire need of medical attention, from the small community of Little Diomede on the Alaskan side.

Two individuals have been flown in to help the girl: trauma surgeon Carrie Walker and her fiancé Rake Ozenna, brought up in the Diomedes and now a captain in the US army’s elite Eskimo Scouts. Vitruk plans to manipulate the US into attacking Big Diomede on the Russian side, giving a plausible excuse for retaliation. What he has not fully factored into his thinking is Ozenna, who is one of the few people who could cope with sub-zero temperatures and atrocious climatic conditions, and present real opposition.

Meanwhile at the White House, the outgoing president, Swain, is using various information streams to assess the best way to de-escalate the crisis. A key player is Stephanie Lucas, British ambassador to Washington, who has links to the British prime minister (also in town) and to significant people in Russia. The Chinese and the North Koreans also turn out to be involved. The president-elect, Holland, is keen to press the button and if a resolution is not achieved before he takes office disaster looks inevitable.

Humphrey Hawksley is better known as a BBC foreign correspondent and maker of documentaries but has written several books. This one reads very well and the action is non-stop, moving briskly back and forth between the Oval Office and the Arctic ice. In Washington the most advanced systems for intelligence-gathering and analysis are being employed and options debated by experienced heads; in the Bering Straits Ozenna is tackling ice storms, not to mention a half-brother who is determined to kill him.

Reference is made to the Cuban missile crisis as a comparison for this fictional showdown; Holland supposedly believes that Kennedy faced down Khruschev, apparently not aware that Kennedy made concessions about missiles in Europe. Such appalling ignorance is difficult to believe, even amongst recent US presidents, but if it helps the plot along I am as usual prepared to suspend disbelief.