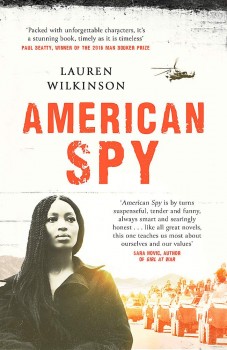 Lauren Wilkinson’s debut must be one of the best contemporary historical stories of 2019. It’s based on the four-year rise and fall of Thomas Sankara, the charismatic Communist revolutionary president of Burkina Faso, the former French colony of Upper Volta, and it starkly contrasts the Cold War struggle for influence in Africa, with an agent’s personal battle with her sense of duty which requires her to betray the man she both admires and loves.

In 1986, FBI intelligence officer Marie Mitchell is at a crossroads. As a young black woman, her career has stalled in an old boys’ club still following the outdated rules and techniques of J Edgar Hoover. She is overlooked for every high-profile squad, and her days are buried in paperwork. Given the chance to join a shadowy CIA task force aimed at undermining Sankara whose ideology and popular title of ‘Africa’s Che Guevara’ has made him a target for American intervention, she agrees. even though she admires the way the charismatic ex-Army officer is changing the face of his country.

At the same time, she struggles with her personal grief at the death of her elder sister whose example led Marie to her career and her dislike at being part of what clearly is a ‘honey trap’ operation rather than being selected for her intelligence. In the tumultuous few months that follows, Marie will observe Sankara, seduce him, and ultimately have a hand in the coup that leads to his assassination. It will also change everything she believes about what it means to be a spy, a lover, a sister, and a good American.

This powerful story knits together spy thriller, family drama, and passionate romance. It’s a face of the Cold War you’ve never seen before, delivering a sexually charged interrogation of both politics, race and patriotism.

Mitchell’s strong story, told in the voice of a strong woman, is narrated in the first person in the form of a diary for her twin sons to read when they are older and spans the years from the Cuban Missile Crisis to the ‘New World Order’.

It covers the sisters’ early years in Civil Rights New York, learning the lessons of ‘passing’ from their pale-skinned grandmother, their father’s life as a black policeman, their mother’s flight from an unhappy marriage, and the balancing act of fighting for black rights while being a good student.

Many black women will recognise and sympathise with the sisters’ concealed rage as they try to navigate a society biased against them. And as the story expands Wilkinson is coherent and confident enough to be unafraid to dig into other messy ideological issues such as her country’s meddling in the affairs of others.

The struggles and emotions are complete believable. The factual elements – Sankara’s revolutionary reforms in feeding, housing and medical care for his people and later his increasingly authoritarian control – help provide insights into the American paranoia and its hostile espionage dealings which made countries Burkino Faso a victim of the Cold War rivalry that affected so many small nations

Tackling, as it does, issues of politics, race and gender – virtually unheard of in espionage literature – the story still manages to remain suspenseful, psychologically sound, and ultimately believable

Wilkinson is an immensely talented writer, unafraid to take risks – and with the skill to overcome them. This is a deeply thoughtful, occasionally dry-witted, textured and exciting story.