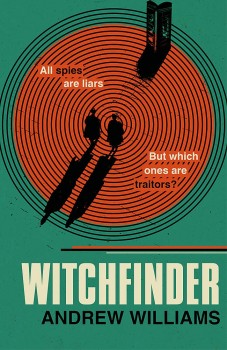 The British Secret Service is in chaos as the hunt for traitors snowballs after the defection of Burgess, Maclean and Philby

There are two things you should read – especially if you’re under the age of 65 – before you attempt the main story which presents a fictitious, but uncommonly accurate reflection of the paranoia which gripped the British intelligence services for almost eight years following the defection to the Soviet Union of KGB senior MI6 officer Kim Philby.

The first is the dramatis personae. The bulk of those who feature in this painstakingly recreated account of the Cold War’s darkest days are real people who most modern readers will never have heard of, despite their positions at the very heart of politics or the Allied intelligence services.

The second is a carefully compiled chronology of the hall of mirrors which was international espionage from 1934 when Russian agent Arnold Deutsch, code-name Otto, was sent to Britain to recruit what became known as the Cambridge Five, a treasonous ring of mainly homosexual undergraduates who would go on to influential posts in intelligence, academia and the arts.

Andrew Williams, a senior producer on the BBC’s flagship current affairs programmes, Panorama and Newsnight, won critical praise and award nominations with his first two Secret Service novels The Poison Tide and The Suicide Club. This story is an authentic account of perhaps the most dangerous time in recent British history when elements of the Secret State were out of control.

The main narrator, Harry Vaughan, is fictional, but so typical of the men and women who made the Service work. He’s a bright, lifelong socialist from a deprived Welsh valley village. A Cambridge scholarship introduces him to a new life, mixing with wealthy young men from the best public schools, some of whom, such as the spies Guy Burgess, Donald Maclean and Philby go on to be his colleagues

Like so many intellectuals in the 1930s, he flirts with the idea of Communism, but the war and a subsequent posting to the crossroads of spying that was Vienna and the brutal Soviet oppression of the 1956 Hungarian revolution settles any doubts he may have had.

He’s totally loyal and devoted to his job and is called back to London to join the urgent review after the triple defections to assess what damage has been done to British intelligence. He joins investigators Arthur Martin and Peter Wright as they pursue other members of the Cambridge spy ring.

Across the Atlantic, a Russian defector has told the Americans that there are more spies within MI5 and MI6 and the CIA’s chief of counter-intelligence, the obsessive James Jesus Angleton – convinced there are Communists under every piece of furniture, let alone the bed  – begins to brief against the British Service and in effect seeks to subordinate it to his own organisation.

Martin and Wright fall under his spell and the total paranoia begins as Graham Mitchell, MI5s deputy director general, becomes their first suspect. Their messianic fervour meant anyone could be caught in their net – even Sir Roger Hollis, the MI5 director general who was, in fact, not cleared until 1982!

No one was beyond Wright’s suspicion. The sudden death of Labour leader Hugh Gaitskell was rumoured a Russian murder; the leftish Harold Wilson, who succeeded him and served two terms as prime minister was a ‘servant of the Soviet Union’ as was his successor Michael Foot. Trade union leaders, academics and journalists were all branded potential traitors.

These counter-intelligence officers, the self-serving and deceitful Wright in particular, who later wrote Spycatcher, believed they were above the law or parliament and freely invented evidence where none was available. Dame Stella Rimington, later MI5 Director General, branded Wright: ‘A man with an obsession, regarded by many as quite mad and certainly dangerous.’

Vaughan, sceptical from the start of the case against Mitchell, records a sleazy saga of unsubstantiated accusations and innuendoes, disregard for legal process, slanders and a complete unwillingness to listen. But as the investigation deepens, the only certainty is that no one is above suspicion, especially himself! He must use all the skills he learnt as a field officer to avoid being dragged into the madness.

Williams is a gifted and skilful writer and a great storyteller. He resists the temptation to sermonise and his characterisation is strong. Vaughan’s sentimental reminiscences of the Valleys can wear a bit, off-set by some amusing political hints, but there is little about the blatantly obvious class system in the Service until Wright is introduced.

His detailed research is evident throughout this evocative recreation – from the bitterly long and cold winter of 1963 to the dramatic 1966 Cup Final. And just when the reader thinks it’s all over, a brilliantly shocking epilogue leaves a host of questions unanswered!