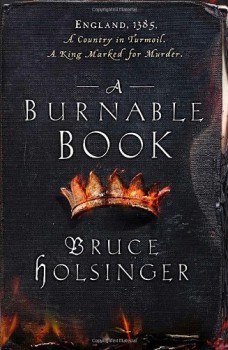 John Gower, poet and dealer in information is asked by his confidant Geoffrey Chaucer, to recover a missing book. The apparently mundane task leads him into a conspiracy to kill the king of England and destroy the Plantagenet dynasty.

Medievalist Bruce Holsinger pulls no punches in this intricately layered and earthy mystery debut set in 1385 in the early years of the reign of Richard II. Less than five years after the Peasants’ Revolt and with London’s poor still on the brink of rebellion, the young king is torn between two powerful noble factions vying for influence, one headed by his uncle John of Gaunt, Duke of Lancaster, the other by Gaunt’s arch-enemy, Robert de Vere, Earl of Oxford.

If there is dissension at the top, the common people are a powder keg. Beset by crippling taxes to pay for the endless war with France, openly questioning a corrupt church through the reformist ideas of John Wycliffe and his Lollards, they are primed for a new rising.

Into this flammable mixture filters rumours of an ancient book of prophesy accurately predicting the forms of death of the first 12 kings of England – with an added prediction for the 13th, Richard – a document which could provoke civil war, rebellion and the collapse of what was then still Europe’s major power.

John Gower, landowner, lawyer, moralist poet, a man with friends in high places where he can trade information for gain, is asked by his friend and confidant Geoffrey Chaucer to recover the only missing copy of the dangerous work. But Chaucer, sometime agent for King Edward III, the Prince of Wales, his brother Prince Lionel and Gaunt, has withheld much of the truth and Gower is sucked into a whirlpool of deceit and treachery which all seems to point to an attempt to assassinate Richard to fulfil the 13th prophecy.

Holsinger’s wide understanding of the period, combined with some clever and sophisticated writing, creates a fascinating picture of medieval London. He is at his best describing the everyday lives and privations of the lower classes and in 500 riveting pages has succeeded in lifting the ‘missing manuscript’ genre to a level which entertains and educates.

This book has almost everything you could want in a historical fiction – rich in period detail and driven by a compulsively engaging and tangled story. It’s clever, in parts witty, and largely historically accurate. The characters are well drawn, the social mores related in unapologetic detail and his multi-layered plot shows a superb storytelling fluency comparable with C.J. Sansom and Nancy Bilyeux. Somehow he manages to maintain high levels of tension through a labyrinthine plot and this convoluted story, so effective on so many levels will reward any devoted reader of crime or historical thrillers.

My only cavil is his depiction of the mercenary leader Sir John Hawkwood as his villain-in-chief. Yes, Hawkwood was ambitious for his Italian family to become part of English aristocracy. Yes, he was brutal when occasion demanded. But to paint him as some Eli Wallach-style bandit from an early spaghetti western and suggest he would ally with the French against his own country to gain his ends contradicts everything I have learnt in 15 years studying a man who has a sound claim to being one of the finest soldiers England has produced.