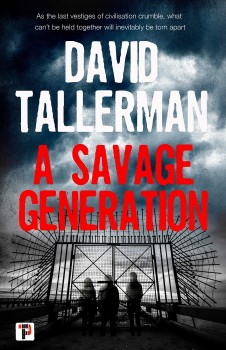 With the civilised world on the brink of collapse, a former prison seems like a good place to hole up, but appearances can be very deceptive.

As civilisation teeters on the brink of collapse, petty criminal Ben Silensky is trying to get his girlfriend and his son out of a city fast descending into anarchy. A mystery illness is sweeping across the US, spreading by blood contact. Those infected are overtaken by a lust to kill, dismembering and even eating their victims. The city has been quarantined and resources are becoming scarce. Ben wants out.

When his attempt to rob a liquor store to get hold of some money to buy petrol goes disastrously wrong, Ben is forced to go on the run. With him is his girlfriend Carlita’s cousin Nando, a cop who’s also had enough. Together they flee the city in search of a safe haven. Nando is certain they’ll be welcome at the open prison where his uncle works.

What he doesn’t know is that the prison is in lockdown, in the grip of one of the convicts, a charismatic but dangerous man known as Plan John, and it quickly seems that Ben might have jumped out of the frying pan into a particularly nasty fire.

Inside the prison, now going by the misnomer of Funland, Doyle Johnson, one of the guards, is in for a shock of his own when his wife dumps his young son Austin on him, ordering him to look after the boy. But the prison is no place for children as both Ben and Doyle quickly find out. Nor is it any place for a woman.

I’ve never been a fan of either zombie books or films, and when it became clear that I’d picked up something that was – as near as damn it – out of the same stable, I started to regret my choice. But by then I was on a train to London for a couple of days with no alternative reading material, so I stuck with it, and I was glad I did. A Savage Generation takes a while to settle down, and the multiple points of view in the early chapters don’t help, as I was having problems working out how the various strands would come together and which would become the dominant narrative.

When I saw that the majority of the action was set inside a prison, I think I was hoping for something with the same vibe as Tim Willocks’ classic Green River Rising and, to my surprise, David Tallerman doesn’t disappoint. The Sickers, as they are known, aren’t the major point of the book, but they do provide a very tense backdrop, with some gory passages, true to the best – or worst – of the zombie shoot ‘em up games.

Beyond that, the book is, at its heart, about relationships – broken, dysfunctional relationships – and at first it looks like there isn’t a sympathetic character anywhere. But gradually Doyle Johnson and his son Kyle got under my skin and I started to care what happened to them. Ben Silensky doesn’t improve much, but then I don’t think he’s meant to. He stays a small-minded petty criminal, determined to control his girlfriend Carlita, and always keeping an eye out for his own gain.

One of the most poignant characters in the book is a young girl who has lived amongst the Sickers but doesn’t seem to be infected with the deadly virus. The book takes on an interesting moral dimension when Katherine Aaronovich, the prison doctor, insists on looking after the girl.

Tallerman’s vision of the world in the grip of a dangerous sickness is bleak but not entirely without hope, and with the prison backdrop he pulls off a clever mix of thriller and horror that left me wondering how far I would be willing to go to survive in a post-apocalyptic world. A Savage Generation is frighteningly realistic, and if you’re a Walking Dead addict, then this is definitely one for you. If you’re not, take a deep breath and give it a go anyway. Like me, you might be pleasantly surprised by the insight Tallerman brings to the party.