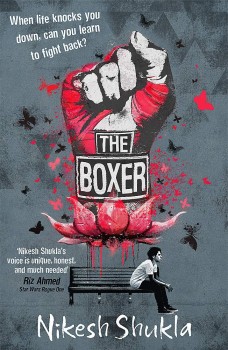 Seventeen-year-old Sunny turns to amateur boxing after a vicious racial assault and finds himself pitted against a former friend in his first competition.

Seventeen-year-old Sunny is adrift in a new college and a new city, as his mother has moved them to be closer to Sunny’s dad who’s undergoing experimental treatment for cancer in a Bristol hospice. Sunny’s only real friend is Madhu, who was assigned to look after him in his first week at college. They struck up a friendship and stayed together.

That advice wasn’t much use to Sunny when he finds himself caught up in a confrontation at a train station on his way home from college. A young man demands a bite of his samosa and when Sunny doesn’t hand it over, he is racially abused and badly assaulted, leaving him badly shaken and injured. When he passes out on the train, paramedics are called and Sunny is rushed to hospital. He finds it hard to come to terms with what happens and is determined not to report his injuries to the police and refuses to talk about the incident.

When a friendly taxi driver steers Sunny in the direction of a boxing gym, he’s reluctant at first, but strikes up a rapport with Shobu, one of the trainers, a female Olympian who convinces him that boxing is about more than just the ability to hit people – it’s about mental attitude and self-confidence. His mum isn’t happy about his new-found interest, nor is Madhu, but Sunny sticks with it and strikes up another friendship with Keir, one of the trainee boxers.

The Boxer is a penetrating look at the dangers of the rise in racism in post-Brexit Britain, where right-wing extremists feel validated in their fear and dislike of anyone they see as different to themselves. Regardless of whether Sunny and his mother were born in the UK, they’re still seen and treated as ‘other’, and Nikesh Shukla spares no one’s sensibilities when he shows the effect of these attitudes on anyone with a different skin colour to our homegrown white supremacists.

The book is told in flashbacks over the course of ten rounds of a competition bout between Sunny and Keir in which it’s clear that this is a grudge match between two former friends, which casts a shadow over their friendship as it unfolds in chapters that are woven in between the short, sharp scenes in the present. Shukla has an enviable ability to get under the skins of his characters, showing life through Sunny’s eyes in a way that doesn’t pull any punches, in the same way that neither of the boys pull their punches in the ring.

The Boxer is a book that may well challenge your perceptions about the sport, if – like me – it’s something you’ve never favoured. But seeing the world, and boxing, through Sunny’s eyes did make me rethink the appeal of the sport, particularly for youngsters such as Sunny. And if it’s able to help teenagers and young men like him to be more comfortable and confident in their own skins, and help them to cope better with the unhealthy tide of racist abuse that seems to be sweeping through this country, then I’m happy to have my own prejudice against the sport challenged.

Shuka examines the other face of radicalisation, showing how easy it is for young white men to be sucked in by far-right extremists and this makes a refreshing change from books that focus on radicalisation within Islam. The Boxer builds on Shukla’s success with his excellent debut Run, Riot.