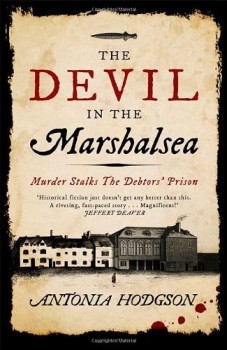 The Devil in the Marshalsea

Marshalsea Prison, Southwark. Country parson’s son Tom Hawkins, a gambler and rake, is thrown into a debtors’ prison where he must share a cell with a man inmates call a devil – and solve a murder or lose his own life.

Country parson’s son Tom Hawkins, a gambler and rake, is thrown into debtors’ prison where he must share a cell with a man inmates call a devil – and solve a murder or lose his own life. The Devil in the Marshalsea is a superbly written, historically accurate, always convincing and often quite chilling view of the seamy side of the early 18th century – and one which draws uncomfortable parallels with modern life.

It would be glib and unworthy of Antonia Hodgson's work to call it a cross between the hard journalistic realities of Charles Dickens and the bawdiness of Henry Fielding’s Tom Jones, but the novel has elements of both. She has an amazing feel and understanding for how people thought and spoke, an absolute necessity for the genre not always strictly adhered to, and a broad enough mind to chronicle its excesses rather than sensationalise them.

Her London of 1727 is a time and place not so different from our own. The city has just survived its first great financial crisis – the South Sea  Bubble – and reminds us that we may not have progressed so far from its grim world of debtors and creditors, the super rich and grindingly poor, all sorts of avarice, betrayal and crime, bizarre sexual appetites and easy gratification.

This wonderfully tense and atmospheric book is set in the brutal nightmare of the Marshalsea debtors’ prison – the perfect place for a tale of skulduggery and murder. Tom Hawkins, one of the most entertaining protagonists for a long time, is a rebel with a cause – the thrill of the gamble and a life of easy gratification.

At a time when you could be jailed – often effectively for life – for a few shillings of debt, he finds himself with a cellmate other inmates refer to as The Devil and to free himself and save his own life must solve the murder of a man who could almost have been his double.

This magnificent story, part social history, an exploration of many faces of evil, with a genuine romantic, if naive, hero of a type I had thought long dead, set in a fast-moving, exciting and genuinely frightening world, is a book to savour.

There are enough twists and dead ends to satisfy the most critical and with all the action centred on a few days, the pace is relentless. This is an absolutely superb debut novel and it appears that this is the start of a series featuring Hawkins. Whatever he does next – and somehow I can’t see it being the career in holy orders his father hopes for – I’ll be looking forward to it.