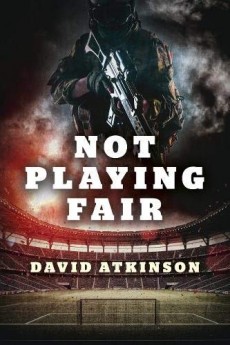 When seven professional footballers are killed in seven days, DCI Charlie Miskin and his team face a seemingly unsolvable problem.

Scottish writer David Atkinson has come up with a great idea for an up-to-the minute noir thriller involving all levels of football, the country’s national game. The problem for discerning readers is that there are unfortunate gaps between concept and delivery which detract from what could have been an absolutely first-class novel.

Seven professional footballers or former players from one of the biggest clubs the country down to the non-league game are killed on seven successive days in seven different cities across the country. Normal police procedure would involve detailed background checks on the victims as the pattern of the killings became established to discover whether they had any past history in common.

Met Police DCI Charlie Miskin and his team make what can, at best, be described as cursory inquiries. A proper investigation would have revealed one obvious link – they all played for the same team as juniors – and this might have enabled them to either reduce the death list or get a lead to a clever, determined and highly organised killer rather more quickly, instead of chasing their tails reacting to each graphically described event.

But, in what looks an intentional dig at the Met, Atkinson has both the team and their senior officers showing all the incompetence of those involved in the very much in the news dismal failure of the £2.5 million Operation Midland. And like the bungled inquiry into an alleged Westminster VIP sex and murder ring, he also suggests the unwillingness to follow through to a logical conclusion is something of an establishment cover-up to avoid embarrassment!

Another grey area is the ability of the killer to access weaponry on the scale required for his rampage, using a different method for each killing. Most former soldiers will tell you it is not impossible to smuggle pistols either into the country or even out of armouries. But high-grade tracking devices, sniper rifles, military explosives or rocket launchers?

On the football side, Atkinson is excellent, highlighting one of the great problems in the game, the power and influences youth coaches can exercise over ambitious young players. He has created a more than believable scenario as a motive for what can only be described as a series of honour killings.

It is hard not to feel sympathy for the killer – a man with enough willpower to go through with the bloody executions and enough ability and brains to stay one step ahead of the rather ponderous law.

There’s a great twist ending, but Atkinson’s Met just don’t want to know about a possible killing outside the country. He’s come so close to a winner with this story, but I’m afraid for me he’s only hit the inside of the post.