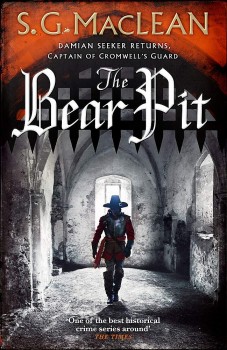 Captain Damian Seeker, Cromwell’s counter-intelligence ‘enforcer’ faces another assassination plot against the Lord Protector and must also solve the riddle of a murder by bear!

SG MacLean is by far the best of the new wave of historical thriller writers and her Seeker series, winner of the 2015 CWA Historical Dagger, has laid down a strong and sustained challenge to CJ Sansom for dominion in the genre.

In this fourth episode, the best of the lot, the Lord Protector’s protector Captain Damian Seeker is back in London in 1656 on the trail of a small group of assassins preparing to strike at the heart of the Commonwealth.

The government of the country is balanced on a knife edge. Royalists and disillusioned former Parliamentarians have united against Oliver Cromwell, now a king in all but name. Three conspirators, representing these factions, plan to assassinate the Lord Protector, paving the way to the throne for Charles Stuart.

With his own leads to the conspiracy being discounted by hard-pressed intelligence chiefs, Seeker, meanwhile, is preoccupied by the horrifying discovery in an illegal gambling den of the body of a man ravaged by what is unmistakably a bear. Yet the bears used for baiting were all shot when the sport was banned by Cromwell. So where did this fearsome creature come from, and why and how would someone use it for murder?

With Royalist-turned-Commonwealth spy Thomas Faithly tracking the bear, Seeker investigates its victim. The trail leads from Kent’s coffee house on Cornhill, to a German clockmaker in Clerkenwell, to the stews of Southwark, to the desolate Lambeth marshes, a place where it is unsafe to venture at night.

MacLean has now built a tight-knit cast of established characters who make a welcome return, from Samuel at the coffee house to Dorcas, helping to conceal Manon from Seeker’s numerous enemies, and of course, Maria, who Seeker just cannot forget.

However, it is the complex but enigmatic Seeker who effortlessly holds centre stage with swaggering ease – a man who can clear a street just with his appearance and strikes fear in the hearts of the enemies of the Protectorate.

This is a riveting, thrilling and totally compulsive read, a blend of fact and fiction, with rich descriptions of the turbulence of the era and the London of this period. The historical notes at the end of the story make it quite clear just how close to the truth it could have been.

Highlander MacLean now faces a problem – history has almost caught up with her! What will Seeker do now? Oliver Cromwell died just a year after this book finishes, and the Stuart Charles II was restored to the throne in 1660.

If this is to be the end of this quite brilliant series, she has succeeded in bringing a much-neglected, but fascinating period of British history to exciting life and Seeker’s adventures will be sorely missed.