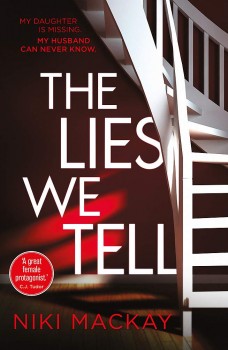 The Lies We Tell

Miriam’s daughter has disappeared, but she can’t tell her husband. Not if she is to keep her marriage from shattering into a hundred pieces.

1994. Ruby Williams doesn’t understand why her stepdad has such a downer on his son, Ben. OK, so he is a typical street-smart London kid, but he’s kind. And when the dreadful thing happens and she has to run without ever looking back, he promises to look after her.
Today. Miriam Jackson, a successful radio presenter, is suffering from a life most would desire; a stable one with no financial difficulties, one that has given her a vibrant teenage daughter and a high-flying husband who never puts a foot wrong. Everything is perfect, almost a little bit too healthy, and let’s face it, dull. Until she bumps into her teen-love, Ben.
While her husband is on the other side of the Atlantic, working on his next film, Miriam succumbs to Ben’s charms. She convinces herself on her way home the next morning that it is a one-off stupid night and never to be repeated. But someone is already making her pay for her transgression; Tabitha, her daughter has gone missing, and Miriam is increasingly convinced she has not left of her own volition.
The police show little interest, forcing Miriam to bring investigator Madison Attallee on-board. Because, for now, she can’t tell her husband where she was the night their daughter disappeared.
This is the second Madison Attallee novel, and I am thrilled to say that the author has maintained her excellent writing standards and attention to detail. Niki Mackay is not a flash-in-the-pan writer. The plot, whilst not particularly original, is sharp, frightening and ultimately unique because of the vibrant and realistic characters. These are people we have never met, but instinctively understand. The main characters are flawed, ugly, beautiful, and struggling. The antagonists are convincing, because we see enough of them to know they believe they are the heroes in their own lives.
This, compared with Mackay’s first fast-paced book, is more a slow burner. But it hooks the reader in from the start. And its intricacy is counter-balanced with short, snappy chapters and deft dialogue.
Caveat emptor – this is not a book for the faint-hearted. Child exploitation features heavily between the covers. And the 1994 period, although the backdrop for more than one hideous crime, is more a tragedy that unravels with a despairing inevitability. Although Ruby’s depressing story may feel disjointed in the first instance, it is a case of stick with it; her contribution is key to the plot.
Mackay makes each character distinct, through dialogue, introspection and behaviour. From the naïve to the cynical, the women in this story leap from the page in a convincing manner.
My only criticism is that the author has followed the trend of trying to make the protagonist’s misdemeanours less significant by pulling a slightly unconvincing worse misdemeanour out of someone else’s bag right at the end. It’s necessary for the denouement, but I feel it let Miriam off a bit lightly.
However, this is one of those books I would say read, don’t read about. It’s gritty, page-turning and a satisfying read.