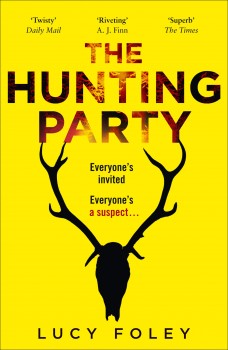 In the next three days, a group of Oxford friends will find out just how dangerous winter in the Scottish Highlands can be.

A group of 30-somethings have been friends for years, since their charmed days in Oxford. But from even before they arrive at the isolated Scottish Highland estate to celebrate the arrival of the new year, the more sensitive among them notice there is an undercurrent of tension that is unusual and unwanted.
This should be a time to unwind. But snide remarks, strange looks, too much alcohol and a new slant on old memories has most of the women on tenterhooks and the men bristling with testosterone. And the Icelandic backpackers, along with the brusque staff, do nothing to take the edge off what is turning into the holiday no one wants to be a part of.
The New Year should be filled with hope. But there is no hope. The missing person has been found – dead. And the police cannot even access the isolated estate to discover and arrest the murderer in their midst.
This is a delightfully atmospheric who-was-it-‘n-whodunit suspense story that makes full use of the snow-covered, isolated milieu to darken the mood. The author dangles the identity of the victim just out of sight until near the end, although I had my suspicions from extremely early on. Unfortunately, at the start, thanks to the sheer number of characters and the female ones being insufficiently distinct, I found myself having to check the title of the chapter in question, as this is written in multiple points of view.

But Lucy Foley does a cracking job in the end, and the characters are unique with secrets from their past or things they don’t want each other to know: the beautiful friend, now part of the golden couple everyone wants to emulate, the not so beautiful friend who is still single, the outsider partnered with one of the core members, the new parents, and the gay couple. Add to that pack the staff who also have backstories with secrets, and this is a real 21st century Agatha-Christie-esque story.
I can’t say I liked any of the characters, which could have left me cold about this novel. But sometimes, dislikeable characters work, as is the case in The Hunting Party. And there is enough quality writing and intrigue to keep the reader invested.
The author has a way of making each scene increasingly claustrophobic, awkward and there-but-for-the-grace-of-sobriety-go-I. She takes those difficult or embarrassing moments we have all suffered from, either on the giving or receiving end, and magnifies them through appalling behaviour and context or alcohol-infused loosening of inhibitions.
The denouement is somewhat disappointing, but I am fairly convinced that after all the nasty little revelations along the journey, the destination would have been a let-down, whoever the victim and killer, and whatever the raison d’être.
There are conveniences and a few loose threads, but not enough to spoil a cracking read that is an easy one-sit experience, preferably done on a dark and stormy night with a glass of malt.
Lucy Foley is an author I will follow with enthusiasm, thanks to this fun plot and her polished, senses-driven writing.