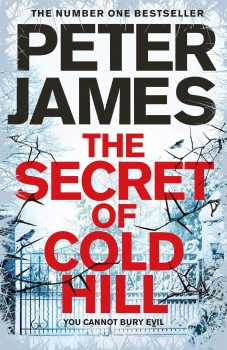 The Secret of Cold Hill

Artist Jason Danes and his wife Emily think they’ve found their forever home. But then they start to feel they’re not alone – and discover that no one has ever lived beyond 40 in Cold Hill House.

Peter James has kept his top-notch Roy Grace police procedurals ticking over very acceptably. There’s often been a hint of woo-woo in that series. But now the author’s gone into spooky over-drive with the follow-up to The House on Cold Hill. So if you want to find out what happened to the Harcourt family, then read on …

Cold Hill House, the huge, crumbling mansion, has been demolished. It’s now being replaced by trendy modern homes with every electrical gizmo there is, including voice-operated gadgets.

Artist Jason Danes and his caterer wife Emily think their new house is perfect, even if their only neighbours, Maurice and Claudette Penze-Weedell, are more than a tad strange. But they’re certain more people will be moving onto the Cold Hill Park estate soon, including the family bombing around in a huge American car, cigar smoke trailing in their wake. It’s a shame the locals in the village aren’t keen on newcomers, though.

And suddenly, strange things start happening in Jason and Emily’s house, and it feels like they’re not alone. Then they discover that no one has ever lived beyond the age of 40 in Cold Hill

Horror isn’t usually my bag, but I’m prepared to make an exception for Phil Rickman and for Peter James. I suspect in the scheme of things that the two Cold Hill books are pretty light when it comes to full-blown woo-woo. At times it feels like things are teetering on the edge of farce – and James seems to have been struck by the Dick Francis wacky names affliction (Penze-Weedell, Fortinbrass …) But he’s also a canny enough storyteller to keep things just the right side of ludicrous.

The Secret of Cold Hill isn’t drastically different from the first book in many ways, and it’s not James at his best by any means. I could never quite make my mind up about the ending of The House on Cold Hill. This time out, the resolution is rather a cop-out and not much of a surprise in the scheme of things. There are a handful of genuinely spooky moments where I was glad I had the lights on, but they’re a bit thin on the ground and rely on a fair bit of repetition.

The book is set around Christmas, so if you want lightweight festive fare, laced with James’ dark humour, that won’t give you indigestion, then The Secret of Cold Hill might be worth a punt. But if you’re only familiar with James’ main series, then you might find you’re disappointed with this offering.