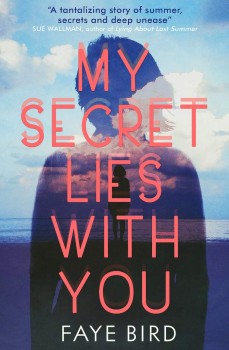 My Secret Lies With You

Cait is determined not to enjoy the holiday her mother has arranged. But a meeting with boy-next-door Marko changes things, and Cait starts to think North Wales might not be quite as dull as she expected. There’s also the mysterious disappearance of a local girl to add spice to the holiday.

Cait would rather be at home in London. Instead, she’s in a holiday cottage near the sea in North Wales, having to put up with her mother’s new boyfriend. She doesn’t want anyone to take the place of her father, and certainly not the boring Johnny, even if he is doing his best to be nice to her.

Things pick up when she meets Marko, the good-looking boy next door who’s spending the summer with his dad and working as a lifeguard on the beach at Harlech. Marko invites Cait to a beach party in a secluded cove not far from the holiday cottages. She’s not sure about going if she only knows one person, but Marko is persuasive, and Cait soon meets spiky, unfriendly Hannah, who works in a local café and quiet, moody Ifan. Cait hopes she can find out something from them about a girl called Ceri Rees, as there are posters all around the town saying that she’s gone missing.

The book alternates point of view between the four friends, each with their own voice and story to tell. But there’s something each one is holding back, and it takes a while for the central narrative to emerge, that of a girl called Alys who appeared the previous year and insinuated herself into the group. Or at least that’s what Hannah thinks. Marko liked Alys and Ifan was in love with her. Alys is gradually revealed through the eyes of the three friends, but Cait never really feels she understands the strange, fey girl that made such an impression on the three.

My Secret Lies With You is a confident, compelling teen mystery, with a summer romance wrapped in deeper layers that gradually peel back to reveal the dark heart of what happened with Alys the previous summer. The narrators all have their own distinct voices and viewpoints, which is never an easy trick to pull off. Cait’s search for the truth of what happened that previous summer, and how it’s connected with the disappearance of Ceri Rees, makes a perfect read on a hot day, when you can imagine yourself by the sea in North Wales, watching the four teens and hoping that nothing goes badly wrong for them, as they’re all a likeable bunch, even the prickly Hannah.

There’s an excellent stable of writers in the field of teen and YA psychological suspense, with Karen M McManus and E Lockhart, to name only two, and this books proves that Faye Bird has got what it takes to create and sustain tension, whist making sure her protagonists remain both convincing and compelling. It’s easy to care about them as they each emerge, laying bare their hopes and fears. And as the truth about the mysterious Alys starts to emerge, I guarantee that you’ll be turning the pages faster in the hope of getting to the bottom of this complex emotional story of love and loss.