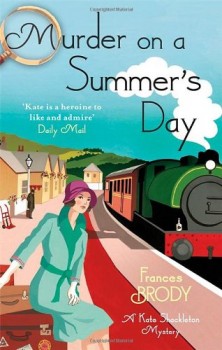 Murder on a Summer's Day

It's 1924 and amateur sleuth Kate Shackleton investigates the disappearance of an Indian Prince who was riding on the Yorkshire moors. But diplomatic considerations get in the way of the truth until more murders and attempted murders force the authorities to act.

A dawn phone call from her cousin James in the India Office sends amateur sleuth Kate Shackleton to investigate the disappearance of the Maharajah Narayan Halkwaer of Gattiawan, who has disappeared whilst out riding on the Duke of Devonshire’s Yorkshire estate, Bolton Abbey.

Kate arrives at the scene to learn that the body of a groom has been found, but Narayan is still missing. She also meets the Maharajah’s most unsuitable fiancée, a dancer from the Folies Bergère, and discovers that a spectacular diamond known as the dubte suraj ki chamak and belonging to the family is missing.

When Narayan’s body is discovered in the woods, the powers that be are determined to put the death down to a tragic accident, but Kate is convinced that he was murdered elsewhere and his body dumped for them to find. The family accuse the fiancée of stealing the diamond and there are more murders and attempted murders, as well as chases across England, Europe and as far as India.

Set in 1924, this book delightfully portrays the upper and middle class England of the inter-war period. Kate is not rich or titled, but she is ‘connected’ via her adoptive grandfather and so is accepted into titled society. As a war widow, she is able to travel the countryside in her own little car, but she automatically defers to the Coroner and to the men from the India Office. As a woman, however, she has access to Lydia, Narayan’s fiancée, to Lydia’s mother, to Narayan’s mother and first wife and various other women, who would not have spoken so openly to a male investigator.

The book is populated with a range of ‘stock’ characters; the hostile local bobby, the showgirl made good, the village yokel, the mysterious Indian valet, but Kate makes an effort to get to know most of them, bringing them to life. The plot has enough twists and turns to keep any whodunit fan happy and the corpses mount up as the story progresses. On the whole, the story is believable, although some of the characters are somewhat two-dimensional.

If you are looking for a light read for a quiet afternoon, this book fits the bill admirably.