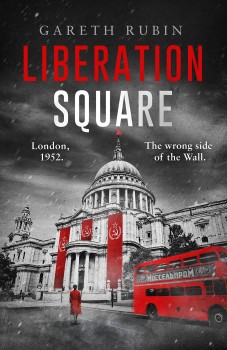 Imagine that D-Day had gone the other way, with the Germans victorious, instead of the Allies. In the highly charged political climate that follows, a woman sets out to clear the name of her husband, who’s been arrested on a murder charge.

D-Day had been a disaster for British troops, so much so that it was quite easy for Nazi Germany to overcome a Great Britain virtually bereft of defence. Shortly afterwards rescue came in the form of Russian and American forces, the Russians occupying the south of the country and the Americans the north, with London split between them. It is in this highly charged political climate that Jane Cawson sets out to clear the name of her husband, who has been arrested for murder.

The beginning of this novel presents us with a “What if?” version of World War II.  Somehow or other the Nazis had learned of the plans for the D-Day invasion of France, the result being a catastrophic defeat for the British army, with a huge loss of life. The Nazis, seizing their opportunity, invaded and easily overcame a virtually defenceless Britain. Nazi occupation did not, however, last long and within a short time the Russians had attacked in the south and the Americans in the north of the country, both being overwhelmingly successful.  London – technically within the Russian 'zone' – was divided between the two. Like the historical Berlin it even has a Checkpoint Charlie

This book deals only with that part of London within the Russian zone. The atmosphere it creates is very convincing, with a political climate not far removed from that of present-day Moscow. There are everywhere signs that attempts are being made to persuade the inhabitants that they are living in a democracy and they seem to be mainly successful.  Russians do not, for example, appear to have taken over the offices of state and there is nothing to suggest that Anthony Blunt – the chief minister – has anything to hide.

He appears to be generally popular and his speeches and broadcasts seem to be aimed at creating a lasting form of democracy following a Nazi dictatorship. It is easy to see why the British people would be ready to welcome a regime that delivered them from the Nazis. It seems that we are in Fatherland territory, though under a different type of regime, when, out of the blue, a murder occurs and we are removed from the alternative history mode and find ourselves in a thriller.

Unfortunately, it is very much a change for the worse because the novel lacks suspense and, although it strives for action, it fails to achieve it. There is never any doubt, for example, that Jane's husband Nick, who was almost immediately arrested for the murder,  is innocent. In fact, under English law he would never have been charged because there is a distinct lack of motive, but we are dealing here with the ‘Secs’ - Russian secret police.   Jane manages to form a relationship with an elderly policeman, though exactly how and on what basis are unclear. However, it appears to provide her with access to all kinds of helpful material as she pursues her objective.

The plot is episodic and involves all kinds of thriller paraphernalia – tables with concealed drawers, stashes of letters, secret codes, unidentified telephone calls.  The author tries hard to arouse excitement but fails to do so and we are left with a rather dull and unconvincing series of events.

Part of the reason for the failure of the novel to thrill is that the characters – including the main one – fail to engage our attention. We ought to be sympathetic to a woman's attempts to clear the name of her husband unjustly charged with murder by secret police but Jane Cawson hardly seems to exist as a person and it is almost impossible to identify with her. This is a pity since the book creates an alternative history scenario that is very well conceived and promises much. The difficulty is that in attempting to include within it the plot of a thriller it falls between two stools.