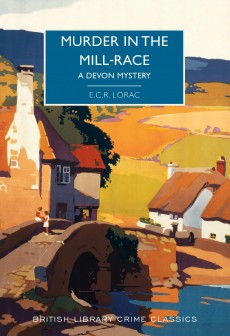 When the warden of a children’s home is killed, local police can make no headway in an isolated and self-contained village. Scotland Yard is called in and Chief Inspector Macdonald sent to take over the case.

ECR Lorac, real name Edith Caroline Rivett, was a prolific crime fiction author from the 1930s to the 1950s, and a member of the prestigious Detection Club. She was never one of the Golden Age star names, although much admired by Dorothy L Sayers, and her work has been almost entirely neglected since her death.

Now a regular in the British Library’s Crime Classics series, her revival is well deserved. Cosy her stories may be – in fact violent action, as one of her Devon characters would say, is ‘rare as hen’s teeth’ – they are nevertheless superb examples of absolutely cracking historical police procedurals.

Her great strength is always her settings and her totally believable characters. Location can be central to the story, giving depth and sometimes even clues. Rivett was evacuated to Devon during World War II and draws heavily on her knowledge and love of the county. Older readers who holidayed in the North Exmoor area as children will nostalgically recognise both settings and character types.

The result is a more than credible picture of an isolated village that has turned in on itself, preferring to deal with its own problems and unwilling to have much to do with outsiders, especially the authorities.

The body of Sister Monica, warden of a children’s home, is found apparently drowned in the village’s mill race. The locals close ranks. The unanimous opinion is that she was a saint. But when local police discover evidence that the death may not have been accidental, the villagers retreat behind a wall of silence.

They appeal to Scotland Yard for help and Chief Inspector Macdonald and his sidekick DI Reeves are dispatched to break down their resistance. Macdonald, Rivett’s longest running protagonist, is his usual taciturn Scottish self. His character is never fleshed out and while supremely efficient it is difficult to warm to this careful, methodical man, who does little but sift facts, red herrings and personalities until he finally teases out the truth.

Macdonald is the more formal interrogator of the upper echelons of village society, while Cockney Reeves uses his easy manner to elicit gossip from lower down the social scale. There’s a bit of the usual snobbery of the times in their relationship, but it’s clear they have worked together often, know each other’s strengths and respect each other, falling naturally into the role that suits them best.
As they gradually dig into the past – particularly the drowning ‘suicide’ of one of Sister Monica’s maids at the home – it becomes clear the sister was not all she liked to appear. Devious and domineering, she had long been the biggest fish in a very small pond and exercised her power through scurrilous rumour affecting those who crossed her. And is it just coincidence that the two deaths happened at the same spot?

The detectives are helped by Dr Raymond Ferens and his wife Anne, who have recently moved to a practice at Milham in the Moor, but soon begin to uncover its secrets.  Not yet fully accepted into village life, they try to offer a clearer picture of the personalities, but Raymond is wary of alienating the people who will be his patients.

This is a confident, well-written story, perhaps a little wordy in places, but in which small details are investigated to great effect and the contrast between the local inhabitants played up to the full.

There’s no great mystery – a seasoned reader will find the use of Holmes’ theory of eliminating the impossible to discover both killer and motive quite early on. But it is the wealth of detail, with some stunningly poetic descriptions and standout characters that make this such a good read.