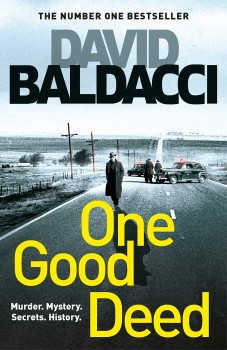 Aloysius Archer is discharged from prison in 1949 to the southern US town of Poca. He is offered work by a local businessman, collecting on a debt, but the job turns out to have complications.

Aloysius Archer is a US veteran with service in Italy and Germany, who more recently got into trouble trying to help out the under-age daughter of a hostile mayor. In 1949 after three years in prison he is released on parole to the dry dusty town of Poca where he has to see out the rest of his sentence, with little money and less by way of prospects.

Soon after his arrival he meets Hank Pittleman, a businessman with several interests around town. Pittleman offers Archer the job of repossessing a car belonging to another wealthy resident, Lucas Tuttle, in repayment of a debt. Archer pays Tuttle a visit and finds that Tuttle has withheld payment as a way of pressuring Pittleman to return his daughter Jackie, with whom he has been openly consorting notwithstanding his marriage to another woman, Marjorie.

Archer finds executing his contract with Pittleman problematic, but has taken an advance which he cannot repay. His problems become much worse, however, when one of the antagonists is killed, leaving Archer as a very obvious suspect. Luckily, Detective Shaw of the State police who is put on the case is another veteran, prepared to listen to what Archer has to say. But Archer is going to have to help dig out the truth if he is to clear his name.

Baldacci is a prolific writer with eight series featuring different protagonists as well as many standalone thrillers and this can lead one to anticipate something formulaic, so it was agreeable to find some interesting features in this book. One of these is the veteran as hero, although as befitting a World War II version he is clean-cut and polite, in fact remarkably free of any antagonism against those who have contributed to him ending up in court charged with multiple counts of murder.

Despite his slow-talking style he manages in the last few chapters to represent himself in court, and very competently too. Despite being a relative newcomer in town, he appears to be the only one who has figured out what really was going on, then pulling the right strings to get the witnesses he needs and manipulating the release of evidence so that he protects the few people in town who deserve some consideration.

It is nice for a change to read a book where the good guy wins out against corrupt opposition, but Archer’s success will strike many readers as being somewhat far-fetched, reliant as it is on a couple of surprisingly sympathetic persons in authority and a judge at court willing to exercise considerable flexibility in the rules. It would be encouraging to believe that an ex-con new in town could enjoy such latitude, but I fear this is something confined to fairy stories.