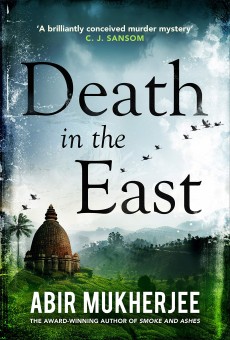 Death in the East

Captain Sam Wyndham is in the hills of Assam taking a cure for his opium addiction, when events bring to mind his experiences as a young constable in London in 1905, 17 years before.

This is the fourth outing for Captain Sam Wyndham and his colleague ‘Surrender-not’ Banerjee, whose fictional adventures are seamlessly blended into the truth of their place and time. Wyndham has finally decided to rid himself of an addiction to opium and in 1922 takes leave from Calcutta to visit an ashram in the hills of Assam where a short course of herbal remedies will initiate the process.

His drug withdrawal brings on a fever and nightmares, and the brief sighting of a figure from the past brings back memories of a case he faced as a new constable in East London in 1905. A woman who he knew well, Bessie, was bludgeoned to death, and Wyndham was instrumental in the apprehension of a young Jewish immigrant who appeared to be culpable.

The newspapers, ever ready to pander to popular prejudice, had the man convicted before he came to court. Wyndham was applauded for his role, but further investigation revealed facts which did not square with the most obvious explanation. He came to believe that the true culprit was a man who had killed his wife, and who arranged for Bessie to be killed when she threatened to expose him.

Convalescing in a small village in the hills, Wyndham meets an attractive Englishwoman and is astounded to recognise her rich husband as a figure he recalls from his past. He calls Sergeant Banerjee to assist him in making an arrest, but events overtake them and a different course of action proves to be required.

The author adds a note on his theme of intolerance within the novel: the suspicion of Jews fleeing to England from the pogroms in Russia in the early 20th century. He regrets what he perceives as the current erosion in tolerance for immigrants and it is difficult not to agree, although looking back in history there are terrible examples. It is maybe only the shape of the phenomenon which is different now.

The other type of discrimination referred to arises from the natural assumption of superiority by the British raj in India. Wyndham is less prone to this than most, but the Oxford-educated Banerjee makes him see that he is being offensive on occasion. The decision of the local ranking police officer to give Banerjee charge of the investigation reveals just how prejudiced are the whites even this late in their stay in India.

The adventure also features two locked-room mysteries; the first turns out to be simply explained, but the second is highly fiendish. As with earlier books in the series, the author’s concerns and interests are well wrapped in a very readable style, with many touches of humour.