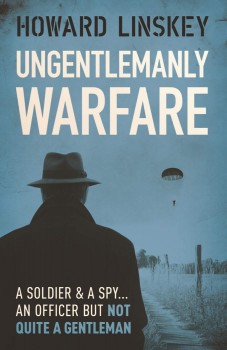 Lone wolf Captain Harry Walsh is parachuted into occupied France by the SOE to kill a German scientist and delay development of a rocket plane that could change the face of aerial warfare.

Winston Churchill himself dubbed the work of the Special Operations Executive as ‘The Ministry of Ungentlemanly Warfare’. Howard Linskey, who admits to a minor obsession with the second world war, boasts a rather sad ability to recite almost every line of that Hollywood nonsense Where Eagles Dare, adapted from Alistair MacLean’s fine novel, which starred Clint Eastwood and Richard Burton.

Unfortunately, that obsession dominates his writing.

This whole story – clearly designed to be a tribute to the brave men and women of SOE who parachuted behind German lines to encourage, and often lead, resistance to the Nazi occupiers – is a pale imitation of MacLean’s rescue story and more a poor man’s James Bond, without the wit.

Ian Fleming is one of several historical figures with a part to play, although his is reduced to a walk-on with just three words – a clear lift from Bond’s self-introduction in the 1959 film Goldfinger: “Bond, James Bond.” Others include Colonel Elder Wills, the SOE’s own ‘mad scientist’ and model for Fleming’s ‘Q’, whose Thatched Barn facility at Elstree produced unconventional weapons including exploding camel dung and deadly fountain pens!

I have issues with the use of the cover name of a genuine agent, the first woman radio operator dropped into France and later captured and executed at Dachau concentration camp, for the heroine and love interest of this story. And the confusion in the opening pages of how many engines the Westland Lysander, preferred method of transport for delivering and collecting agents to and from France, not only speaks of shoddy research, but also sets the tone for what is to follow.

Captain Harry Walsh is a brilliant, ruthless and ungentlemanly unconventional soldier, decorated and promoted for his heroics at Dunkirk. A scholarship boy from a minor public school, he has no time for the class-ridden senior structure of the army, represented by his own section head Major Price, who despises him and harbours doubts about Walsh’s honesty and his mysterious departure from his regiment.

When news reaches Britain that the Nazis’ amazing rocket-propelled fighter, the Me 163 Komet, is to undergo battlefield tests in Normandy, there is panic. The Komet is almost twice as fast as any Allied machine and if it enters squadron service could tip the balance of the war in the air and indefinitely postpone the planned invasion of Europe.

The Komet has its problems. Unstable fuel, short endurance and landing difficulties, chemicals so dangerous the planes sometimes combusted spontaneously on the tarmac, force development delays. Luftwaffe boss Herman Goeing drafts in the brilliant Professor Gaerte to get the first of Hitler’s ‘Wonder Weapons’ into service. The order comes down from Churchill that Gaerte must be stopped and Gubbins is charged to organising his assassination. Harry becomes part of a ‘Jedburgh’ team – an Englishman, a Frenchman and an American and a return to Normandy means he is once more the target of the sadistic Gestapo officer, Colonel Tauber.

He finds himself working with people he knows – the American agent Captain Sam Cooper, who, acting on US orders, abandoned him on a mission in Yugoslavia, a pragmatic enough decision, but one which still rankles. He is also reunited with female SOE agent, Emma Stirling, with whom he has a passionate history although Harry intends to honour his commitment to his wife. Emma isn’t just a romantic diversion but also has a vital role to play.

Despite the historical facts scattered throughout, the story stretches credulity. Many of the French and German characters are little more than cardboard cut-outs and the complex, morally ambiguous protagonist Walsh is hardly a lovable character.

In an all-action whirl of sabotage, violence and murder, Linskey’s feel for time and place, with some snappy down-to-earth dialect dialogue and his descriptions of the often woefully prepared, badly-armed and badly-led French maquis, together with the brutal Nazi reprisals against the civilian population, stand out.

If you have a particular fondness for historical espionage stories, this will prove an entertaining read, encapsulating the very real horrors of the occupation of France and the role played by the SOE, but it wasn’t for me.