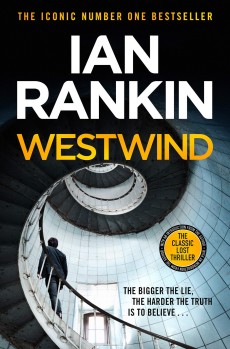 Satellite surveillance monitor Martin Hepton is baffled when its pictures from space fail for a crucial period. Days later an American shuttle crashes, killing its crew bar the lone British astronaut. Martin’s attempts to discover what went wrong plunge him into a deadly international conspiracy.

Ian Rankin’s hugely successful Rebus series began in 1987, have now been translated into 36 languages and are worldwide bestsellers. Westwind, written in 1990 at a time when Rankin was supposed to be working towards a PhD in Scottish Literature, juggling jobs and struggling to find his voice and metier as an author has been re-issued with a few parts updated to incorporate modern ideas, political and scientific concepts.

In what was intended as a futuristic, hi-tech thriller – now sadly outdated by today’s cutting-edge technology and contemporary realities – Martin Hepton monitors pictures from Britain’s first Zephyr surveillance satellite at a ground station in Lincolnshire. When pictures stop transmitting for a near-critical period, co-worker Paul Vincent spots something odd. He plans to discuss the incident with Martin, but disappears – reportedly sick and admitted to hospital.

Soon after, an American space shuttle malfunctions. The crew members all die with the exception of British astronaut, Major Michael Dreyfuss – found in the wreckage with another crewman’s hands locked around his throat!

Set against a  background of international political turbulence with America planning to quit NATO and withdrawing its troops from Europe at the request of EU governments – a move which has sparked protests and civil unrest – this dated and infantile story line involving British and American security services and the military is both politically and editorially naive.

It’s difficult to judge who is the enemy and who the friend as Rankin airs all the then – and still – fashionable doubts about our security set-up and who monitors whom!

A string of murders, a beautiful kill-crazy female assassin, a clearly mad ex-Marine officer and an inevitable militaristic right-wing international plot put the plucky ‘little man’ Martin in extreme danger. The only person he can trust is his ex-girlfriend, Jilly Watson, a national paper journalist now working in London – who just by coincidence has been a friend of Major Dreyfuss since childhood!

The characters do not stand up. The near-paranoid Americans, and the slightly less hysterical Europeans, who are supposed to make the story mysterious and enigmatic, but succeed only in making it look silly.

This uneven ‘lost classic thriller’, according to its own publicity, is nowhere near the usual standard readers have come to expect from Rankin. Even a below-par effort is still worth reading compared to some other writers, but I can’t help suspecting that this is an attempt to cash in on a reputation which is now such that anything with his name on it will fly off the shelves!