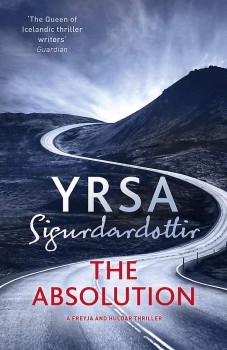 Detective Huldar and child psychologist Freya are working together again. Their own relationship goes through various stages as they investigate vicious murders in Reykjavik, being announced by a killer via a mobile phone Snapchat app.

The Absolution by Yrsa Sigurðardóttir is the third instalment in the seriously gripping Children House/Freya and Huldar series, reuniting two characters who started making waves as soon as they faced each other in the first book. The novel explores a very dark side of social media, turning instant communication into instant terror, and claiming many casualties along the way.
Reykjavik police find out about the crime in the modern way fitting our times – via the mobile phone Snapchat app which allows for sending messages which then vanish several seconds after being seen by the recipients.
The first video is sent to all of a teenager girl’s contacts and shows her begging for forgiveness before she is brutally beaten. Stella is working late in the cinema from where she then disappears. Her school friends initially think that it’s a sick joke and cannot comprehend why she has to say sorry to the attacker, until they realise that the sender wants to terrify them, especially as the assault is extremely vicious.
When Stella’s body is eventually found, it is marked with a number 2. She’s described as a friendly, lovely girl, but it soon becomes apparent that she was anything but that. Instead she bullied others and had a reputation to prove it.
In order to solve the murder, the rough and rebellious detective Huldar joins the investigation and brings in the child psychologist Freya to help with questioning the friends of the murdered teenager. The duo’s collaboration focuses on the possibility of widespread bullying, yet the main investigators don’t want to follow this line, looking instead for a random killer.
But then there’s a second victim Egill, marked 3. Same method of communication and same type of injuries. The investigation turns into a nightmare of no leads, conflicting opinions of the main players, added unease between Huldar’s boss Erla and the rest of the team. Of course, Huldar and Freya fear finding victim number 1.
The tension between them is exceptionally well portrayed, both evaluating own lives and careers, being pulled together and this keeps the reader guessing what will happen next in terms of their potential relationship – or lack of it at this stage.
In the background, a story of teenager Laufa’s tragic experiences at school unfolds and although the reader might begin connecting events from the past with current murders, the conclusion is both shocking and upsetting when finally, the painful truth is exposed. The reasoning behind the killings is sick yet somehow devastatingly understandable for people who were failed by the system and the authorities who were supposed to help them.
This is a masterclass in gruesomeness of descriptions, gore and terror, analysing on every level the effects of unrelenting psychological and physical abuse using modern technology but relying on traditional methods. The author balances the eerie atmosphere of overwhelming situations with the reality of daily tedious procedural work at the police station. Strong characterisation of the people populating her fictional world ensures that they are multidimensional and relatable. Inventive ways to despatch others off this mortal coil just proves her excellent imagination.
All these, plus the complex but logical narration makes The Absolution, translated by Victoria Cribb, is a psychological thriller at its very best. Read it and get off the unsocial media.