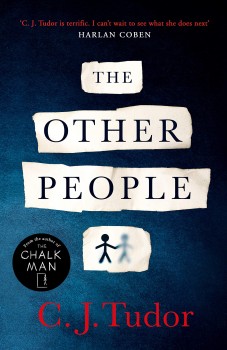 Gabe cannot believe his daughter is dead. But his search for her is driving him ever closer to a death-trap of revenge.

Gabe is troubled and exhausted. His life consists of driving a campervan up and down motorways ever since his wife and daughter were murdered in a home invasion three years before. This obsession is because on the day of their murder, he is certain he saw his daughter in another person’s car at the time she was pronounced dead. He is convinced someone took her, even though her body was identified by his father-in-law.

Fran is on the run. She and her daughter, Alice, have spent years moving from one place to another to keep Alice safe from “a bad man.” Alice has episodes of narcolepsy that she calls falls, which occur when she stares into mirrors. She doesn’t remember anything from her time in this state, but she always wakes up with a pebble in her hand.

Katie is a single mother working at an all-night service station. She has met Gabe, the thin man, but their interaction is superficial. But Katie is curious, wanting to know why a man would spend his nights driving back and forth along the same stretches of roads.
And then there are The Other People – those who will reach out to you in your darkest moments with a promise of help …
CJ Tudor has become my go-to author when I need a soupçon of supernatural wrapped up in an involved and meat-on-the-bones crime. The Other People does not disappoint. The plot is intricate and demands a degree of attention from the reader. But those demands will be met, because the characters are easy to invest in. They are believable in their actions, reactions and introspections, and their desperation is utterly credible.
Tudor’s writing of the ramifications of grief is powerful and moving. It gives life to the murderous resentment the reader senses in more than one of the characters. Gabe is a believable central protagonist who stirs the emotions. He is drowning in secrets. He knows that, ironically, hope is destroying him. His itinerant lifestyle is the desperate backdrop to loneliness, making his outlandish behaviour reasonable.
Fran and Katie are less developed, but still convincing as single mothers in difficult circumstances who are looking out for their children. Alice is enigmatic, disturbing and compelling. Her narcoleptic episodes glitter with the supernatural, whilst having their feet firmly on the ground of reality.
Description is discreet but atmospheric. Dialogue is sharp and pithy. The book is a beautiful presentation of how thorough editing makes every word count. However, it is not without weak points. The main one is that when Tudor raises the curtain on the Other People, it is, unfortunately, a little hesitant and superficial. I would have liked more.
That said, this is a vibrant, compulsive read. It has twists that are worthy of the name, along with sprinkled reveals and a spider’s web of connections that the author teases onto the page with dexterity to raise maximum levels of suspense and tension.
This is the third standalone novel by CJ Tudor, an author who has found her voice and who delivers her stories with conviction.